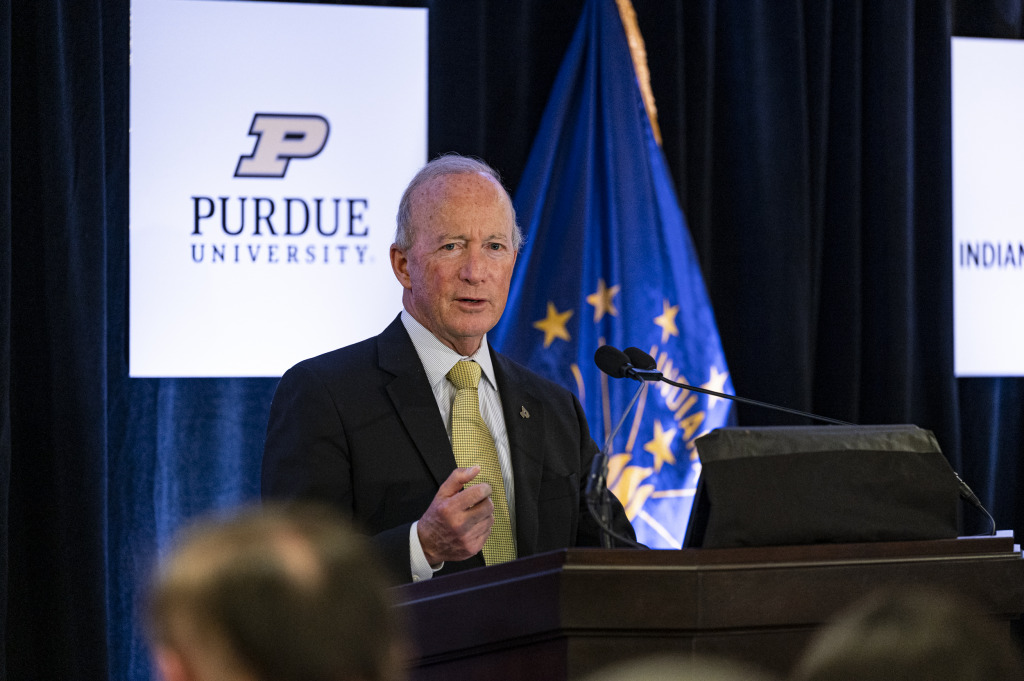 Purdue University President Mitch Daniels speaks during an announcement about the transformation of the IUPUI campus, on Friday, Aug. 12, 2022. (IBJ photo/Mickey Shuey)

Purdue University says it sees big potential to grow its Indianapolis presence as part of an IUPUI revamp announced Friday that will give both Purdue and Indiana University autonomous identities in the state’s capital city.

On Friday, Purdue and IU’s boards of trustees both approved a new agreement that will rebrand much of IUPUI as Indiana University Indianapolis.

As part of the agreement, Purdue will continue to operate in Indianapolis but will do so under the Purdue name—with plans to grow enrollment in the city by at least 1,000 and likely more as well as expand or place several programs here.

“Many of us at Purdue for years have felt that we would like to have a bigger, more visible and I hope a more impactful presence here in Indianapolis, but the current structure did not permit us to do that,” Purdue President Mitch Daniels said at a Friday afternoon press conference.

The changes, which Purdue and IU are describing as a realignment, are expected to be completed by the start of the 2024/2025 academic year. Because the process has just begun, many details are still being worked out.

Among those details, Purdue hasn’t yet settled on what it will call its Indianapolis operations.

But the school says it plans to open a branch of its Applied Research Institute on or near the current IUPUI campus. Purdue will also take responsibility for the engineering, computer science and technology programs at what is now IUPUI.

And Purdue and IU will also collaborate on a new biosciences engineering institute in Indianapolis.

Currently, IUPUI graduates earn either an IU degree or a Purdue degree, depending on their program of study. Under this setup, IUPUI’s enrollment includes about 5,000 Purdue students and about 26,000 IU students.

Purdue’s initial goal is to increase its Indianapolis enrollment by 1,000 students, but “I really hope it turns into much more,” Daniels told IBJ after the press conference.

Daniels said Indianapolis could be a good site for Purdue’s long-standing co-op programs, in which students gain real-world work experience by completing alternating periods of work and study.

Typically, Daniels said, participating in a co-op extends a student’s time in school an extra year because the co-op experience may involve working at a company far from Purdue’s campus.

Another potential option might be for Purdue students to spend their entire four-year college career in Indianapolis.

Either way, having an expanded presence will give Purdue the chance to offer a big-city experience to those that want it, said incoming Purdue President Mung Chiang.

“It creates exciting urban opportunities for students and faculty at Purdue,” said Chiang, who assumes that role effective Jan. 1.

Now that the realignment has been made public, Daniels said, Purdue plans to reach out to its students and get a sense for what options they’d like. “We’ll see which one has the most appeal.”

As for IU, that university said it envisions expanding its existing Kelley School of Business and IU Luddy School of Informatics, Computing and Engineering programs in Indianapolis.

IU President Pam Whitten said her school isn’t yet prepared to talk about what its specific Indianapolis enrollment expansion goals might be. IU will start tackling this topic, and other aspects of the realignment, next week, she said.