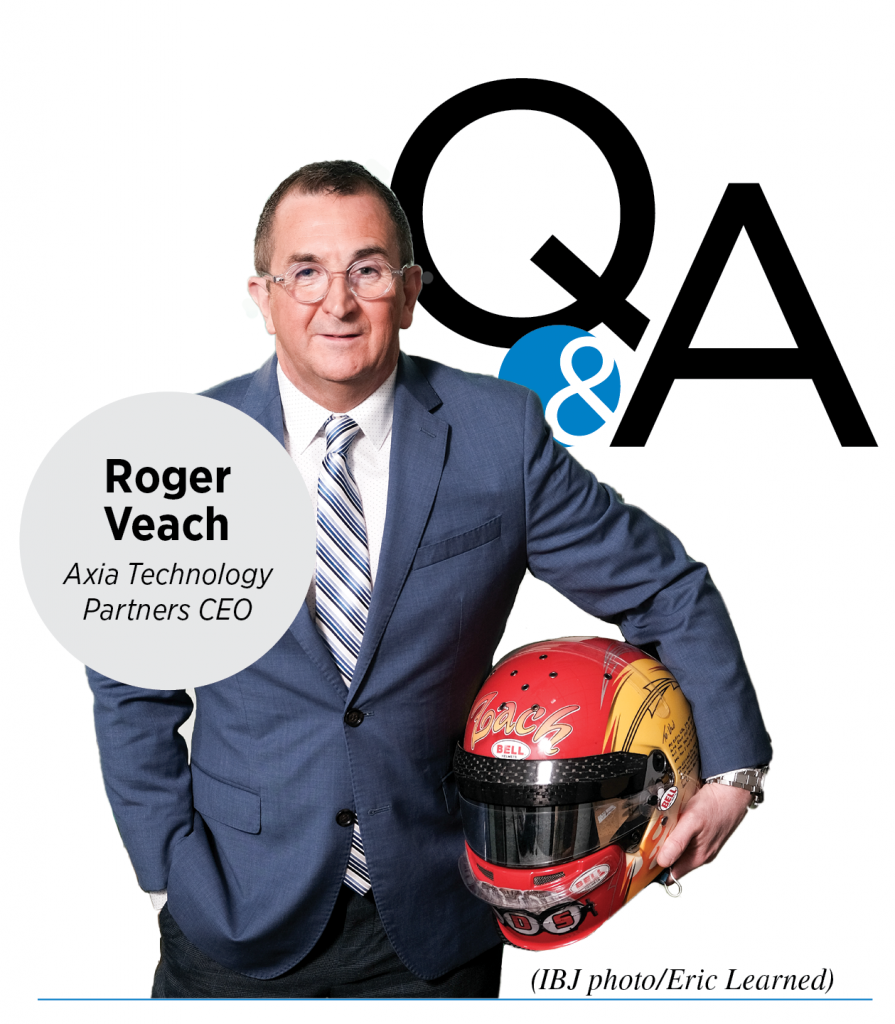 Roger Veach’s career has been a long and winding road, starting in the trucking industry and making its way to the world of high tech. Today, he’s CEO of Indianapolis-based Axia Technology Partners, an IT services company growing rapidly.

But Veach’s fast-paced career hasn’t kept him from enjoying the rocket ride of his son, Zach Veach, a race car driver for the Andretti Autosport racing team. In fact, Dad has missed only one of his son’s hundreds of races.

How did you become a tech firm CEO?

I was the [chief financial officer] of a trucking firm, and I couldn’t find software that did what I wanted. So we ended up writing our own software. The next thing I know, 200 trucking companies were using my software. That led me to start ADS IT Solutions in Chillicothe, Ohio, back in 1993. We did hardware, software, and phone and internet systems.

In 2019, ADS merged with Axia Technology Partners. How is that going?

Last year, we grew 70% without concentrating on marketing. Before the merger, Axia and ADS were each growing 10%-15% annually. When we merged, Axia had four employees and ADS had eight. Now we have 36—30 of which are in central Indiana. We’ve added network engineers, billing specialists, project managers, people in professional services and sales, and a virtual chief information officer.

What spurred the post-merger growth?

After the merger, we could offer complete solutions. We could work on so many different things with respect to hardware, software, including custom software, managed systems and telecommunications after the merger.

We’re in 30 states across the U.S., including California and Hawaii. We’re working with a lot of different companies: a grocery store chain, water-well drilling companies, the Atlanta Braves, Ohio State University and Andretti Autosport. We work with some big, high-profile organizations, but we also work for a lot of small mom and pops. One client has two stores and four computers. Even though we have a big footprint, Indiana is still very important to us, with about 50% of our business there.

So who owns Axia now?

Our projections for 2020 are 50%-60% growth. Once we hit 30% growth this year, we’ll start adding employees. I project adding about eight employees this year, likely network engineers and people in professional services.

Is Axia OK on office space?

We’re actually getting ready to move from our office at 151 N. Delaware St. downtown to a bigger space in Zionsville. We’re sharing space [in Zionsville] with Kerauno and many of our people live north, so it makes sense.

How do you run Axia and keep up with Zach’s career?

At age 12, Zach got a go-kart. He’s raced 364 times in 13 years at various levels. I’ve only missed one race. This is his third year on the IndyCar Series circuit, and we’re really excited as the season approaches.

Do you worry when he’s racing?

I never get worried when he’s in the car racing. But he’s also taken up rock climbing. He’s serious about it. He has a van and goes all over doing big-wall climbing and living out of his van. When he’s rock climbing, I’m scared to death.•