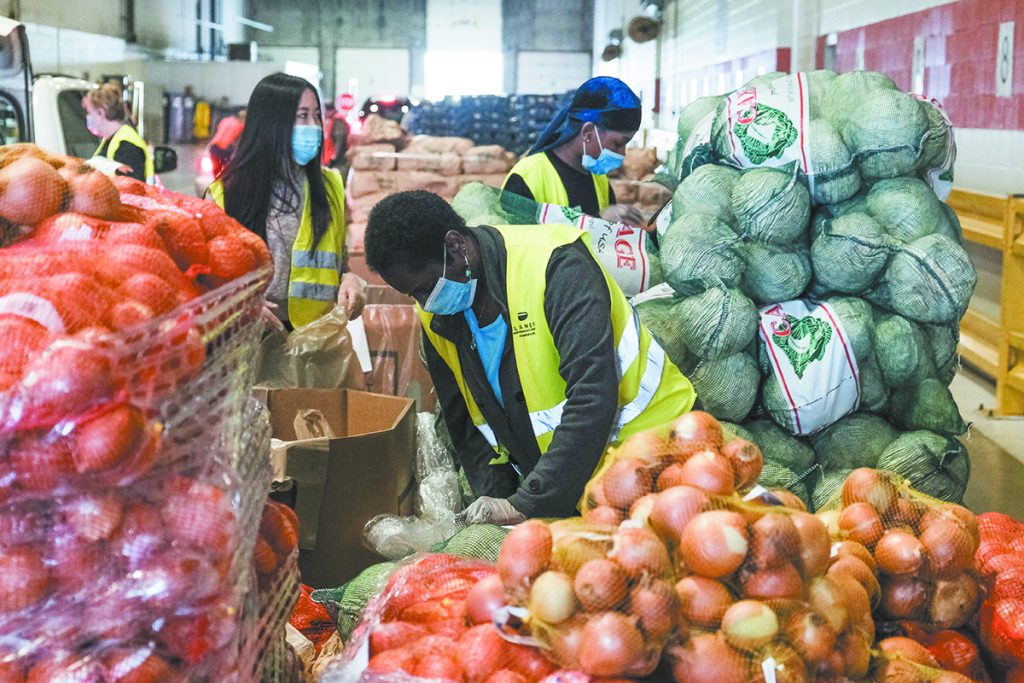 Just like the virus, the Lilly Endowment Inc. moved quickly.

On March 6, Indiana confirmed its first case of COVID-19. Within a week, the Indianapolis-based endowment granted $15 million to underwrite a new community fund dedicated to helping social service agencies respond to the pandemic.

Eleven days after that, the fund awarded a first round of grants to 46 not-for-profits.

And that was just the beginning of the Lilly Endowment’s involvement in trying to help Indiana deal with the pandemic and adjust to its aftermath.

In the weeks since the coronavirus started sweeping through the state, the endowment has awarded a total of $68.5 million in grants to support response efforts. Most of that—$58.5 million—has stayed in Indiana.

The endowment declined IBJ’s request to interview its chairman, president and CEO, Clay Robbins. But in written responses to questions, the endowment said it has not earmarked how much it will spend, although it is likely future grantmaking announcements will continue to be focused on Indiana needs.

That focus on Indiana isn’t new—nearly 70% of the endowment’s grants in 2018 went to Indiana organizations, a fact that makes Indiana “the envy of the nation,” said Claudia Cummings, president and CEO of the Indiana Philanthropy Alliance.

And that will be increasingly important in the coming months.

Experts say it’s all but certain more funding will be needed to help not-for-profits respond to the coronavirus crisis, because its long-term impacts are still unknown.

“The ecosystem they support will continue to be under stress,” said Amir Pasic, the Eugene R. Tempel dean of the Indiana University Lilly Family School of Philanthropy. “The bottom line is, Indiana is very fortunate to have this philanthropic rock at the core of its community.”

The endowment said its first priority has been addressing basic human needs like hunger and housing. But that only slightly narrows the options of organizations and causes to fund.

“I can’t imagine being in their place and having to weigh all of the possibilities,” said Bryan Orander, president of Indianapolis-based Charitable Advisors. “You have to assume there’s 100,000 people in line saying, ‘Hey, I have an idea.’ And probably most of them are good ideas.”

The endowment is relying on existing partnerships to administer a number of the grants, as well as its knowledge about local communities.

“They don’t just throw money at problems,” United Way of Central Indiana CEO Ann Murtlow said. “They are deliberate about their investments.”

Community leaders commend the endowment’s decision to jump to the aid of central Indiana and the state.

“There’s no greater example of the leadership that Eli Lilly and Co. and the Lilly Endowment provide our community than the decisive and immediate actions they have taken to serve and protect our citizens during this crisis,” Murtlow said. “The company with its sort of immediate action on the testing front and Lilly Endowment with its immediate investment of philanthropic resources into the community.”

The Lilly Endowment is one of the largest private charitable foundations in the country, with $15.1 billion in assets at the end of 2018. Most of those assets are still tied to Eli Lilly and Co. stock, which it was founded with in 1937.

And while the overall drop in the stock market might be hurting other private foundations, Eli Lilly stock has grown about 7% since the beginning of the year.

“Their capabilities are not diminished then,” Orander said. “That allows them to kind of supercharge their efforts.”

‘This is what philanthropy does’

One reason the endowment was able to respond so quickly is that this is not the first disaster it’s experienced.

After the 9/11 terrorist attacks in 2001, the endowment committed $30 million to the American Red Cross, the Salvation Army and Community Funds Inc., an affiliate of the New York Community Trust, to address recovery needs.

After Hurricane Katrina ripped through New Orleans in 2005, the endowment awarded $20 million to the American Red Cross and the Salvation Army for relief and recovery efforts.

During the Great Recession of 2008-2009, the endowment partnered with the United Way of Central Indiana to establish an economic relief fund similar to the new COVID-19 fund.

But the endowment was more limited in its capabilities during the recession because Lilly stock wasn’t as strong. In fact, the value of the endowment’s assets dropped 26% in 2008, leaving the organization with $5.7 billion, roughly one-third of its value today.

The endowment’s initial gift to the economic relief fund in 2008 was $2 million, compared to the $15 million it gave to establish the fund this time.

Other foundations suffered similar consequences during the recession and had to balance protecting assets with providing for the community.

Orander said that situation might have prepared philanthropic leaders for today, because some have observed in retrospect that more grantmaking should have been done then.

Cummings said the philanthropy alliance has had weekly calls with community foundation leaders across the state, and she’s not heard too much concern yet about protecting assets instead of giving grants. But “it’s tough because obviously the endowments are down because of what’s going on in the stock market,” she said.

“This is what philanthropy does,” Cummings said. “We serve our communities. We work for the greater good. Humanity is in great need of assistance right now, and that’s what we’re here for.”

The Lilly Endowment isn’t the only foundation rapidly moving to approve grant requests related to COVID-19. The Bill & Melinda Gates Foundation, for example, started awarding funding for pandemic-related relief in January. Since then, it has committed $100 million toward global efforts to combatthe disease.

The Gates Foundation is by far the largest private foundation in the country, with $46.9 billion in assets. So far, its coronavirus grantmaking has been spread across the globe, as opposed to the Lilly Endowment’s choice to keep much of its spending closer to home.

The Gates Foundation’s “view of what they’re responsible for is just different than what the endowment is focused on,” Cummings said.

However, the Gates Foundation has given $5 million to agencies in its home base, the Seattle region, in addition to the $100 million it has spent elsewhere.

Other foundations have also stepped up. The Rockefeller Foundation in New York granted $20 million to create a tracking and management system for COVID-19, and the Michigan-based W.K. Kellogg Foundation contributed $500,000 to support the United Way of Battle Creek and Kalamazoo Region Disaster Relief Fund.

Foundations across the country are also loosening restrictions on existing grants so not-for-profits have more flexibility on how dollars can be spent.

Other Indiana foundations are also playing a role.

The Ball Brothers Foundation, for example, has awarded more than $100,000 to organizations in Muncie and Delaware counties; the Foellinger Foundation in Fort Wayne is committing $1.35 million for Allen County organizations; and the Indianapolis Foundation announced April 7 that it had directed $238,000 to nine organizations.

The community foundations in each county are also working with Indiana United Ways to distribute the grant funding from the Lilly Endowment.

The Indiana Philanthropy Alliance has identified more than 50 coronavirus funds that community foundations have established across the state.

Cummings said she’s encouraging Hoosiers to give to these community foundations now, because even small amounts can add up to make a difference.

There’s also an added tax incentive, thanks to the economic relief package Congress passed. The CARES Act included a provision that offers a $300 tax deduction for charitable giving, and taxpayers do not have to itemize their return to reap the benefit.