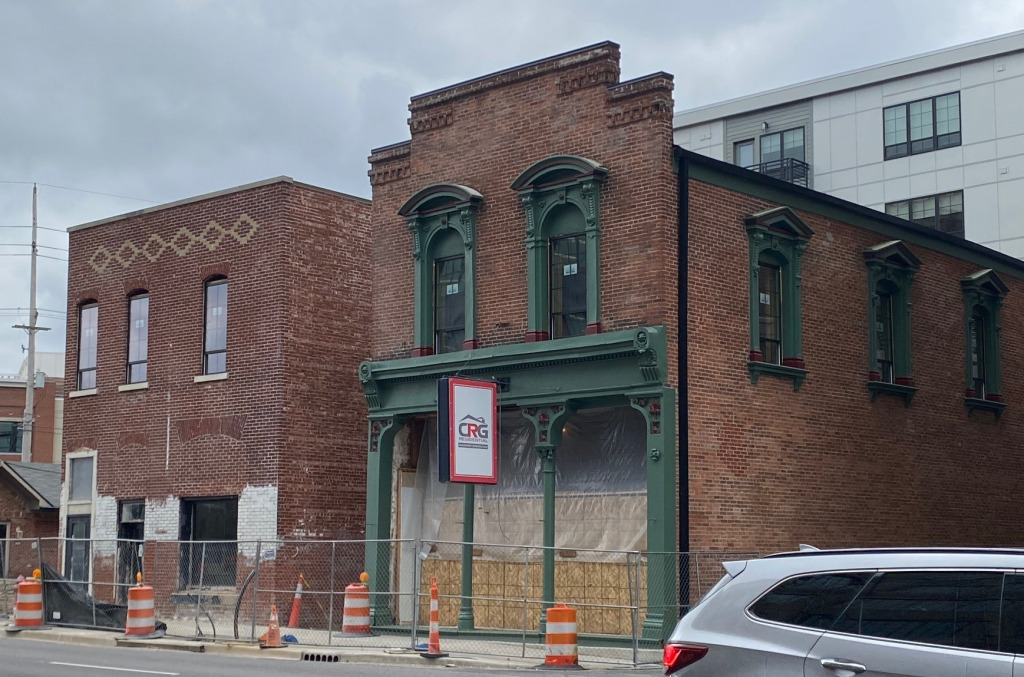 Amid the bustle of new construction in downtown Fishers, a pair of historic buildings along 116th Street near Nickel Plate Station are set to receive new life. That won’t be the case, however, for two other old buildings in the same block that were determined to be “beyond repair.”

Carmel-based developer CRG Residential LLC is restoring the two buildings—one that most recently housed the Vardagen and Sure Shot Coffee shop and another that has been home to a general store, American Legion post and an insurance office.

The renovations are a part of a larger $157 million master development in the Nickel Plate District originally announced in December 2018 by Indianapolis-based Browning Investments. City officials and developers hoped at the time to also preserve the two neighboring buildings that most recently housed Nickel Plate Bar & Grill and Fishers Barbershop, but that effort proved unsuccessful.

CRG President Chris Reid said in an email that retail space will be constructed on the ground level of each of the 2,800-square-foot buildings that will be saved. The second floors of both structures will be renovated into residential space. Repairs were made to the foundations of both buildings.

“The exteriors of these buildings are having their brick work cleaned and re-grouted to get them ready for the next 100 years,” Reid said.

Reid said full windows will be restored in the building that was built in 1886 at 8698 E. 116th St. that most recently housed a State Farm office. The structure, which was originally built as Sam Trittipo’s general store, is the oldest remaining building in the original city limits of Fishers. The building has “significant iron work features” that CRG’s research found came from an Indianapolis interurban line.

The former Vardagen and Sure Shot Coffee building, constructed in 1913 immediately to the west at 8684 E. 116th St., had bricked-in windows that have been restored, Reid said. The building, which was built as the original home to new Fishers National Bank, still contains a vault. After the bank closed in 1930, the property housed several restaurants, including White’s Kitchen.

Reid declined to say how much CRG is spending on the renovation projects.

The area to the west of the buildings, which includes the former locations of the Fishers Barber Shop and the Nickel Plate Bar & Grill, will be redeveloped. The small, single-story barber shop building at 8666 E. 116th adjacent to the bank building has already been demolished.

The land where the barber shop once stood will become a community plaza that will include bike racks and other amenities for people using the Nickel Plate Trail, Reid said.

A new building will be constructed at the site of the former Nickel Plate Bar & Grill, which closed in April 2019 after 28 years in operation. Reid said CRG spent nearly a year looking into whether the eatery building at 8654 E. 116th St. could be rehabilitated.

“But as time progressed, it was apparent that it was beyond repair as evidenced by a local building commission inspection,” Reid said.

In 2018, funding was earmarked for renovations to enhance the building, which was first constructed in the 1880s and was originally home to the Parks Place Saloon. The eatery was known for its pork tenderloin sandwich, Hobo Stew and the exposed brick that made up its interior.