Rep. Woody Burton, 74, of Whiteland announced Thursday that he will retire at the end of his current term in 2020. He has served in the Indiana House since 1988. 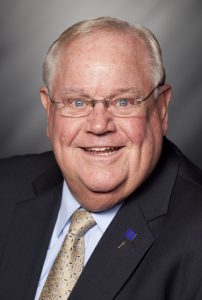 “Serving our district and our great state has truly been an honor,” Burton said in a prepared statement. “My top priority continues to be doing what’s best for the citizens in Johnson County, and representing their needs at the Statehouse. For me, it has always been about helping people in our communities, and ensuring the policies we consider for new laws support all Hoosiers.”

Burton serves as the chair of the House Financial Institutions Committee and as a member of other committees, including the House Education Committee, House Judiciary Committee and the House Committee on Rules and Legislative Procedures.

During his tenure at the Statehouse, Burton has helped push for property tax relief and supported legislation that allowed voters to permanently cap property taxes by passing a constitutional amendment. He’s also worked on legislation to establish bullying prevention programs in schools, increase accountability in the child welfare system and give Hoosiers the option to have an “In God We Trust” license plate with no extra cost.

“Woody is a dear friend, a man of unwavering faith and a compassionate public servant,” House Speaker Brian Bosma said in a prepared statement. “We have served alongside one another for the last 30 years, and I know our friendship will continue long after our service in the General Assembly. From passing property tax reform and the largest tax cut in state history, to helping children with dyslexia and supporting children in foster care, Woody has always put the needs of Hoosiers first and stayed true to his conservative principles.”

Bosma, 62, announced Tuesday that he would retire from the Legislature at the end of the session. He told lawmakers he plans to take over as the national chairman of the Republican Legislative Campaign Committee.