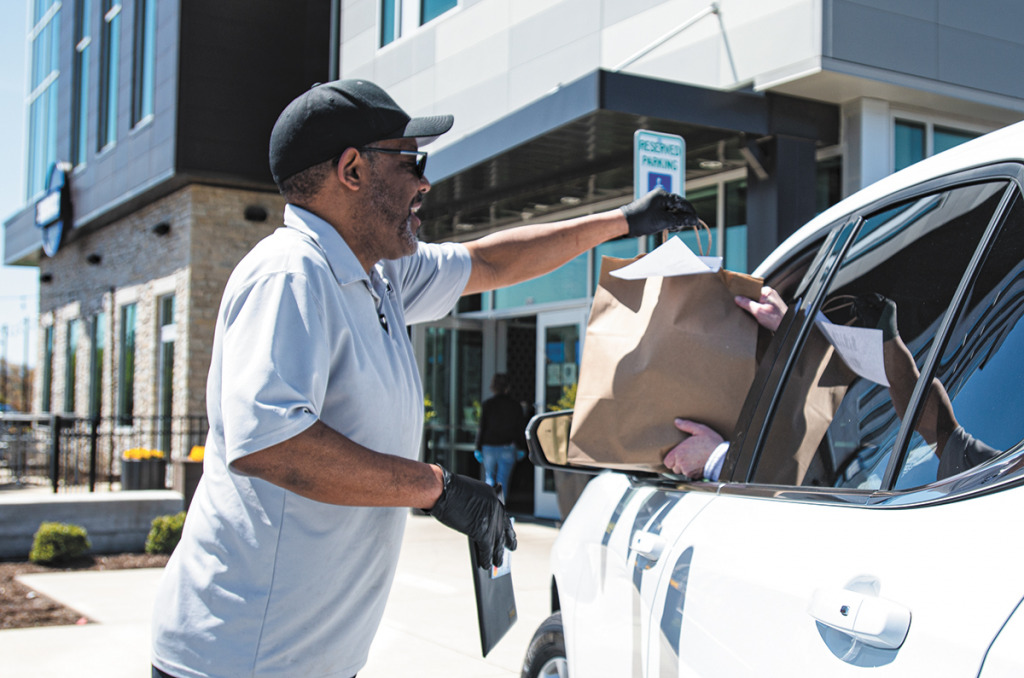 Like many restaurants across the region, Bru Burger in Noblesville turned to take-out service in the spring when dining rooms had to close. (IBJ photo/Eric Learned)

Restaurants will be allowed to have indoor seating up to 75% capacity, an increase from the 25% or 50% caps to which they’ve been limited since June 1. A restriction of no more than six people per table will remain in place.

Additionally, bars and music venues will be allowed to operate at 50% capacity—up from 25%—and stay open until 2 a.m. instead of midnight. Bar seating will be permitted, as long as social distancing is in place. Gyms will also be allowed to increase their capacity from 25% to 50%.

The order also raises capacity from 25% to 50% at zoos, museums, music venues and parks.

Mayor Joe Hogsett said he expects the increased capacity will be a “shot in the arm” for the city’s hospitality and restaurant industries as the city prepares for a month of basketball tournaments, including the NCAA Division I Men’s Basketball Tournament.

Even so, he said, the decision to allow more people into the establishments wasn’t influenced by the upcoming slate of events.

“I want to make it clear though that these decisions in no way were driven by March Madness or the basketball tournaments,” he said. “We’re making these changes today because of the data, and because public health experts upon who I rely, have told me the progress that we together have made is making a difference—a substantial difference.”

New cases of COVID-19 continue to fall in Marion County, along with deaths and hospitalizations tied to the disease.

Since spiking in December at more than 1,000 cases per day, the county has dropped to an average of about 109 cases per day over the past few weeks. Dr. Virginia Caine, executive director of the Marion County Public Health Department, said the figure is “still high,” and she would prefer to be seeing only about 35 new cases per day at this point. Deaths are down to one to two per day—meeting county expectations.

Hogsett and Caine said they believe the addition of hundreds of basketball fans to the equation isn’t likely to pose any new public health risks for the city, but added they hope visitors and residents will “stay vigilant” in their safety precautions.

“The NCAA is assisting us, so that anybody buying a ticket—they’re making sure the education gets to them about our expectations in our city and what needs to be done,” said Caine. “We’re putting a lot of messages out there are to outside folks that may come into our city for these game.”

Restrictions could be reimposed if the health data calls for it, he said.

For both the Big Ten Conference and NCAA basketball tournaments, venue capacity limits will be 25%, maximum. The Big Ten has not yet announced spectator policies for the men’s and women’s tournaments.

29 thoughts on “Restaurant, bar capacity limits in Marion County to be eased March 1”