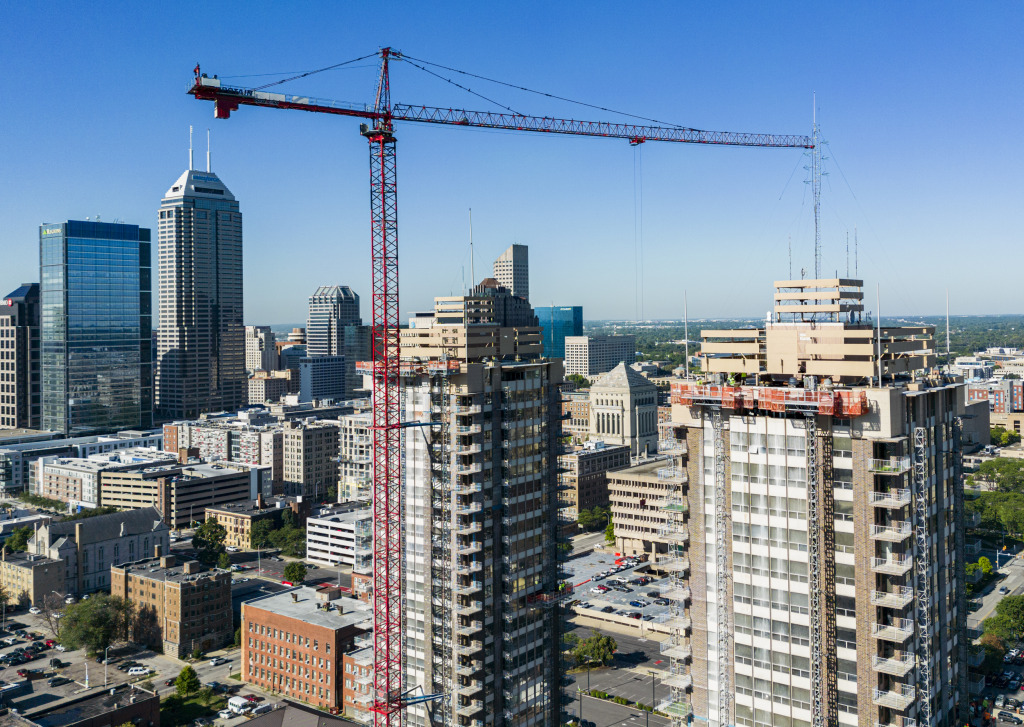 The Riley Towers apartment buildings are expected to have every exterior brick replaced by mid-2023. (IBJ photo/Mickey Shuey)

The owner of Riley Towers Apartments in downtown Indianapolis plans to complete an extensive, $7 million facade project by mid-2023. But even with a crane now towering over the complex’s two 30-story structures, it’s likely passersby won’t notice much of a difference once it’s done.

That’s because owner Barrett & Stokely’s project is performing a brick-for-brick replacement of the buildings’s outermost layers, with plans to stay close to the original design.

The twin buildings, which rank as the tallest residential buildings in Indiana, are on the west side of Alabama Street and on either side of North Street.

The replacement is the Indianapolis-based property management and development firm’s solution to longstanding water-infiltration issues, with the expectation that the new facade will to prevent water from breaching the masonry. The $7 million price tag only accounts for the two taller buildings. The shorter, 16-story apartment building north of those—which is also part of the Riley Towers campus—had its bricks fully replaced during the pandemic to solve the same problem.

The Riley towers were built for about $40 million in 1962 and 1963 as part of what was expected to be a much larger, four-phase multifamily project aimed at reducing urban decay. The remaining phases were abandoned after the project failed to gain traction among middle- and high-income Indianapolis residents. The three buildings total about 500 apartment units with rents ranging from $1,012 to $3,668 per month.

“We’ve had a lot of repairs over the years and we were battling some really extensive repairs with … some sporadic water infiltration,” said Andrew Stokely, vice president of construction for the firm. “We were having trouble figuring out where it was coming from, so by being able to take the full facade off, we’re able to put a proper water barrier within that.”

The work involves the addition of an air membrane, sandwiched between the facade and the layer of block beneath it. Stokely confirmed both buildings are safe and structurally sound, noting they were both built mostly using concrete.

Plans for the project were approved Aug. 25 by the city’s Metropolitan Development Commission Regional Center hearing examiner, who asked the firm to request city approval after Barrett & Stokely last year completed the shorter apartment structure without a formal green light from the examiner.

The project was required to receive approval because it is within the Indianapolis Regional Center district and the brick pattern and color for the buildings are changing—even with the firm using custom made bricks that are nearly identical to the original.

“We worked really hard to make it so that people don’t notice that the buildings look any different,” Stokely said.

Stokely said masonry work has changed drastically since the 1960s—when the towers were among the tallest buildings in Indianapolis—and the new techniques will be a long-term solution to the water problem.

Work on the buildings is expected to conclude by June 2023. The crane attached to the south building is allowing work to occur on both structures simultaneously, reducing labor costs.

Indianapolis-based F.A. Wilhelm Construction Co. is the general contractor on the project.