Home » CORRECTED: Roche gets city’s OK to project messages on side of north-side HQ building 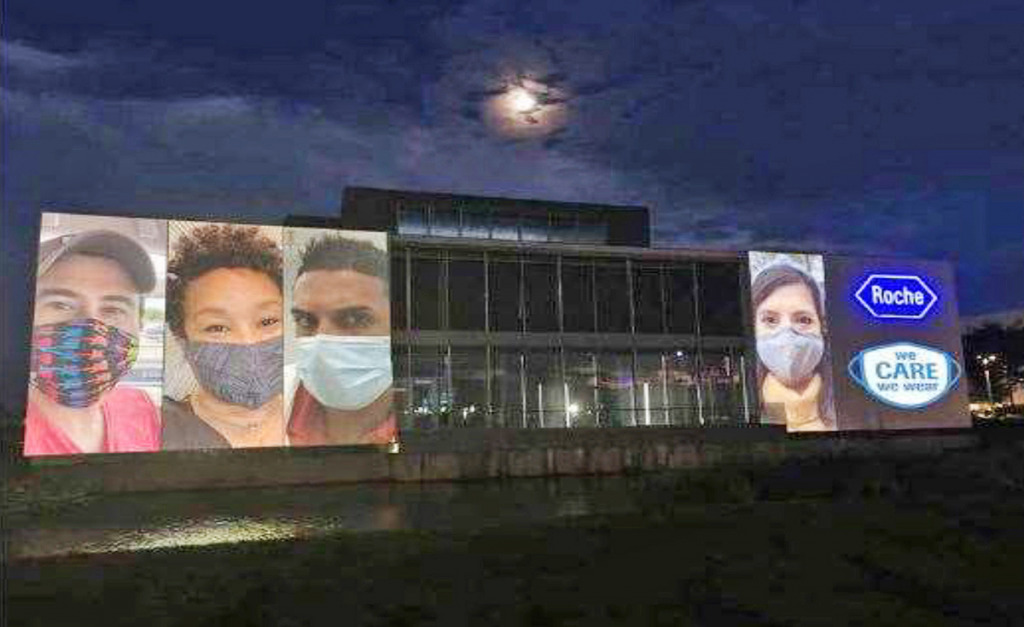 In a statement to IBJ, Roche said it hopes to display “supportive and inspiring messages” visible from I-69 as part of a new corporate initiative. (Image courtesy of the city of Indianapolis)

Correction: A previous version of this story said that Roche’s request needed approval from the Metropolitan Development Commission and City-County Council. It has been corrected to reflect that only the approval granted on April 19 by the Board of Zoning Appeals was necessary. You can see other corrections here.

Medical manufacturer Roche Diagnostics Operations Inc. has received city approval to display public health messages on the side of a building in its North American headquarters campus along Interstate 69 in Indianapolis.

The testing and medical instruments maker had asked the city’s Board of Zoning Appeals to allow two digital projection signs on the western facade of Building E, the campus’s northernmost structure at 9115 Hague Road.

Its proposal called for two 1,406-square-foot signs that would extend to 38 feet above the building’s grade, while leaving visible the company’s blue wall sign on the southern portion of the facade.

The company sought a variance of development standards from the BZA because the city’s current zoning regulations do not account for digital projection technology when addressing non-commercial signage. The BZA approved Roche’s request on April 19.

The projections, which would not have an audio component, are expected to be used for public interest purposes rather than to promote the company’s products. An example included in filings with the city shows messages promoting masking to prevent the spread of COVID-19.

In a brief statement to IBJ, Roche said it hopes to display “supportive and inspiring messages” as part of a new corporate initiative. It did not include a schedule in city filings for rolling out the program.

The building on which Roche plans to project the images is about 130 feet from the nearest edge of Hague Road and about 200 feet from the closest edge of I-69. The messages would be easily visible from the highway, and from west of the property along 96th Street.

Roche agreed to several commitments for the use of the projections as part of its effort to win support from the city. Among them, the company said all images displayed on the side of the building would be static in nature and run for at least 10 seconds at a time. It also said it would not use any identifying corporate logos or slide transitions in the projections.

It also agreed to include safeguards to prevent glare or a brightness level that could be distracting.

Based in Switzerland, Roche has maintained local operations along Hague Road since the mid 1960s. The 159-acre campus sells and services machines and software to help physicians, hospitals and laboratories throughout the United States and Canada analyze data and diagnose patients.

In 2012, Roche began a $300 million renovation to the sprawling property. The updates included five new buildings, all of which run entirely on renewable energy. The newest buildings on the campus opened in 2016.

19 thoughts on “CORRECTED: Roche gets city’s OK to project messages on side of north-side HQ building”