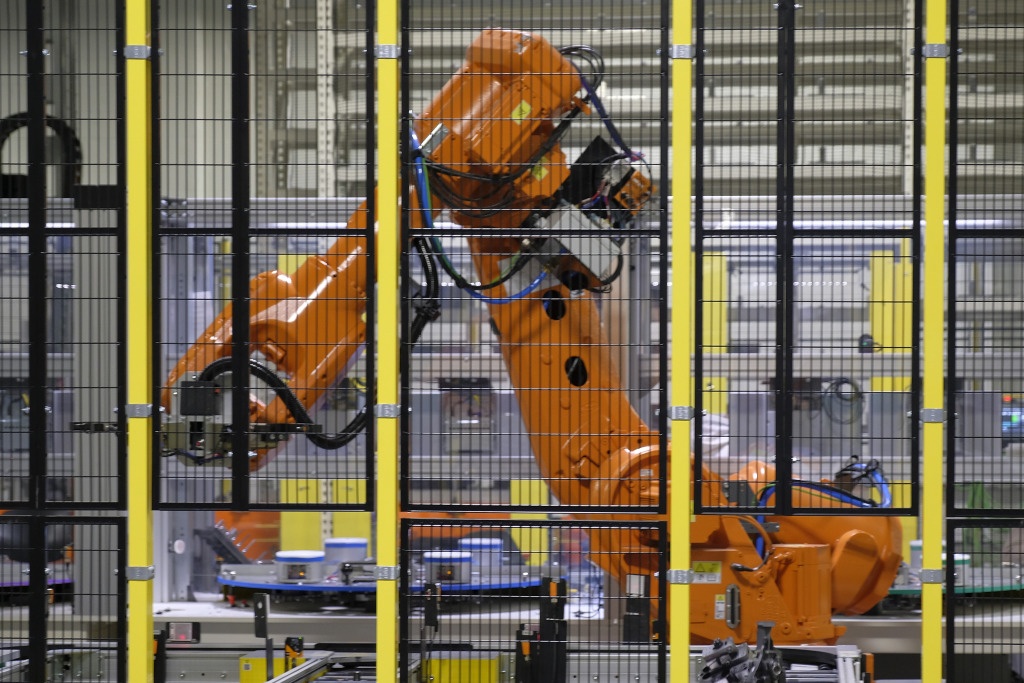 Supercell robots in the Rolls-Royce Victory Building are programmed and managed by employees, to move engine parts around to high-tech machines in the manufacturing process. (Rolls-Royce photo by Alan Petersime)

Rolls-Royce North America has landed a U.S. Air Force B-52 bomber contract that could be worth up to $2.6 billion, and the company says it expects to add 150  jobs in Indianapolis as a result.

On Friday, the Air Force announced that it had awarded Rolls-Royce a contract to supply replacement engines for its fleet of B-52s. The contract includes 650 of Rolls-Royce’s F130 engines, plus associated support equipment and commercial engineering data. Work is expected to be complete by Sept. 23, 2038.

Rolls-Royce says it will build and test the engines at its Indianapolis campus. The company recently completed a $600 million modernization effort that included $400 million in facility and machinery upgrades at its facilities near Tibbs Avenue and Raymond Street, plus another $200 million in technology research.

Rolls-Royce has supplied the Air Force with aircraft engines for more than 70 years. The company’s engines power the Air Force’s C-130H, C-130J, CV-22 Osprey and Global Hawk aircraft, and all of those engines are designed and made in Indianapolis.

The contract is worth an estimated $500.9 million, or up to $2.6 billion if the Air Force exercises all the contract’s options.

“We are proud to join a truly iconic U.S. Air Force program and provide world-class, American-made engines that will power its missions for the next 30 years,” Rolls-Royce North America Chairman and CEO Tom Bell said in a prepared statement. “The F130 is a proven, efficient, modern engine that is the perfect fit for the B-52.”

Rolls-Royce announced in February 2019 that it intended to bid on the B-52 contract, saying it was one of the largest contracts its Indianapolis operation had ever pursued.