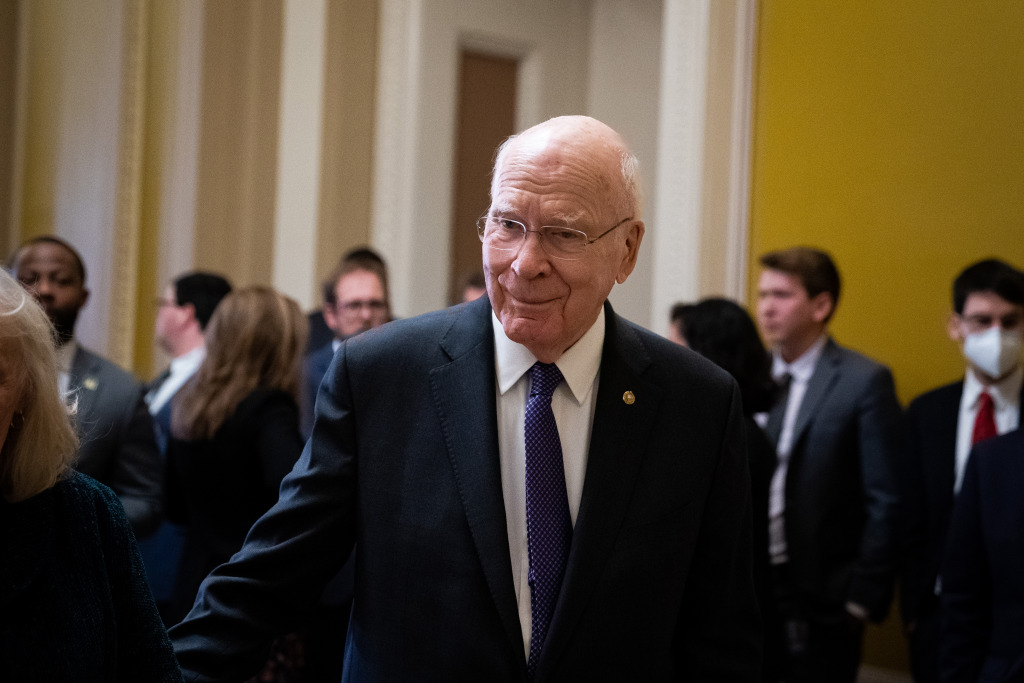 Sen. Patrick Leahy, D-Vt., walks through the Capitol on Tuesday, one of his last days as a lawmaker. Leahy, who is retiring at the end of this session of Congress, was one of the lead negotiators on the $1.7 trillion bill to fund the government through Sept. 30, 2023, known as the omnibus. (Washington Post photo/Elizabeth Frantz)

The U.S. Senate on Thursday adopted a sprawling, roughly $1.7 trillion bill that would fund the government through most of 2023, as Democrats and Republicans resolved a last-minute standoff over immigration and voted to avert a shutdown in the final days of the year.

The bipartisan 68-29 vote teed up the measure for debate in the House, which has until the end of Friday to approve a package that boosts domestic and defense spending, finances President Biden’s economic agenda and provisions a raft of new emergency aid, including to Ukraine.

The compilation of long-stalled appropriations bills, known as an omnibus, would provide nearly $773 billion for domestic programs and more than $850 billion for the military, covering expenses through the 2023 fiscal year, which concludes at the end of September. Republicans had insisted on robust Pentagon funding in months-long talks with Democrats, who secured some—but not all—of the health, education, labor and economic spending they wanted.

The must-pass nature of the bill—the final major piece of legislation before Congress resets in the new year—also offered a window for lawmakers to advance other long-stalled priorities. The sweeping omnibus is filled with provisions that would expand some Medicaid benefits, help Americans save for retirement, reform the presidential electoral vote-counting process and ban TikTok on government devices. Lawmakers later added two measures that protect pregnant and nursing women in the workplace, including the so-called PUMP Act, which requires employers to provide workers time to breast feed.

“This is one of the most significant appropriations packages we have done in a long time,” said Senate Majority Leader Charles E. Schumer, D-N.Y., on Thursday just before voting began, stressing that it made “aggressive investments in American families, workers, and national defense.”

But the debate, raucous and delayed at times, also revealed a more difficult political truth about the year to come. A handful of Republicans—anticipating the party’s takeover of the House on Jan. 3—opposed the bill and threatened their own leaders for even negotiating with Democrats over spending. Their staunch, public resistance seemed to foreshadow tougher battles on the horizon in a Capitol that often legislates from the precipice of a fiscal cliff.

“This is an act of extortion being leveraged on the United States Senate right before Christmas,” said Sen. Mike Lee, R-Utah, in a speech on the chamber floor, blasting lawmakers for having written it “utterly in secret.”

Late Wednesday night, Lee held up consideration of the omnibus as he tried to force lawmakers to extend a controversial immigration policy implemented during the Trump administration. Senate leaders ultimately worked out an arrangement to permit a series of amendment votes on the policy, known as Title 42—placating Lee, even though his gambit failed, while allowing lawmakers to finalize the bill hours later.

The Senate vote marked a culmination of months of talks between three top appropriators—Sens. Patrick J. Leahy, D-Vt., and Richard C. Shelby, R-Ala., and Rep. Rosa L. DeLauro, D-Conn.—who unveiled their 4,155-page text in the early hours of Tuesday morning. Leahy and Shelby had been fiercely committed to striking such a deal, as the two senior leaders of the Senate Appropriations Committee prepare to retire at the end of the session of Congress.

In the minutes before the vote, the duo took to the Senate floor, touting the omnibus as their final compromise in Congress—brief speeches, later punctuated by applause, that reflected the chamber’s shared desire to finish their work before inclement weather snarled holiday travel. Shelby said he and his Democratic counterpart had amassed “nearly 100 years of combined service,” adding of the bill: “We know it’s not perfect, but it’s got a lot of good stuff in it.”

House Republicans formally sat out of the discussions, as Minority Leader Kevin McCarthy, R-Calif.—who is vying to be speaker next year—argued for weeks that lawmakers should hold off on brokering a long-term funding agreement until the GOP assumes control of the House. Republicans felt that postponing the talks would have given them leverage to extract spending cuts and other policy concessions from the Biden administration.

At one point, McCarthy even delivered rare criticism of Senate Minority Leader Mitch McConnell, R-Ky., for engaging with Democrats in the waning hours of the year. The party’s House leaders then recommended that members vote against the omnibus as well as a one-week extension, adopted last week, that gave negotiators more time. If they had prevailed, Republicans could have shut down the government.

In the end, though, Republicans in the Senate supplied more than the necessary votes to help Democrats advance the $1.7 trillion package in the chamber. Their cooperation came despite new threats from conservative lawmakers in the House, including Reps. Chip Roy, Texas, Scott Perry, Pa., Andy Biggs, Ariz., who pledged this week to exact political revenge—scuttling any legislation offered by Senate Republicans who supported the omnibus. McCarthy himself later endorsed that approach.

On the Senate floor Wednesday, McConnell acknowledged the omnibus “isn’t perfect, but strong,” touting its boost to defense spending. And he stressed that the alternative—a “potentially endless cycle” of short-term funding agreements, which would have frozen federal funds at their existing levels—”is simply not an option we can adopt.”

The omnibus includes a $68 billion increase in domestic spending from the prior fiscal year, according to Democrats, with the money parceled out over a wide array of health care, education and labor-focused agencies and programs. It funds an increase in the Pell Grant, an award for lower-income college students, by $500. And it provides $3.5 billion for the Food and Drug Administration, an increase from the prior year, in the wake of supply chain crunches and infant formula woes.

Lawmakers also included additional sums to fund Biden’s top economic priorities, especially a bipartisan law to improve the country’s roads, bridges, pipes and ports that passed last year. To implement that package, the spending deal allotted more than $10 billion for water infrastructure, for example, and another $15 billion for clean energy and climate change.

For Republicans, the chief concern was defense, as they looked to fully fund the Pentagon after approving a roughly $850 billion measure authorizing its key programs earlier this month. The total amounted to a 10 percent increase from the prior fiscal year, which funds a pay increase for military service members along with new weapons, aircraft and warships.

Lawmakers also agreed to send $44.9 billion in emergency military, economic and humanitarian assistance to Ukraine. The amount exceeded Biden’s initial request, and lawmakers delivered it shortly after the country’s president, Volodymyr Zelensky, spoke to a joint session of Congress.

The bipartisan omnibus also put another $40 billion toward responding to recent natural disasters, including Hurricane Ian and other storms, floods, wildfires and droughts. But lawmakers once again failed to provision any new emergency money to respond to the coronavirus pandemic, as Republicans maintained their fierce opposition even as the Biden administration stressed that the aid is necessary to protect against a future surge.