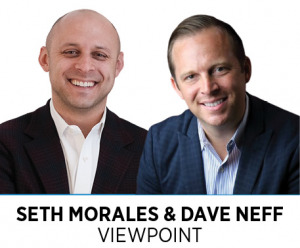 Hosting March Madness has brought the nation’s spotlight on Indianapolis, but this should not be seen as the endpoint. We see it as the beginning of Indianapolis 3.0. The future of our city is bright.

Yes, we are hosting over 100 basketball games this month, including the entire March Madness tournament. However, that opportunity did not happen overnight. The modern era of Indy started around 1960.

Previous and current leaders have created a flywheel of momentum we must continue into future generations. Many important initiatives and organizations were jumpstarted in 1.0 such as the building of Market Square Arena, launching of The International Center, creation of the Indiana Sports Corp. and White River State Park and so many more we don’t have room to list here.

The 1980s saw the 1982 National Sports Festival come to the city, the Major Taylor Velodrome constructed the same year, the Indianapolis Colts moved here from Baltimore in 1984 thanks to a newly built Hoosier Dome and the Circle City Classic featuring two historically black colleges/universities (HBCUs) each year.

The well-documented economic development sports strategy continued to manifest itself in the 1987 Pan American Games being hosted here as well as the building of Victory Field, Bankers Life Fieldhouse and Lucas Oil Stadium.

The ultimate culmination was, of course, the 2012 Super Bowl, prior to this year’s entire March Madness tournament being hosted in the city.

This intentional effort has resulted in the creation of 80,000-plus jobs in the tourism and hospitality industry. The Indy 500 continues to be an annual landmark event for the city and several Final Fours have left an indelible mark.

In addition, organizations such as the FFA, NCAA, Salesforce and many others have moved to Indy in the 2.0 era. The remarkable work of Visit Indy has put us on the map as a top convention city in America. Additionally, the imprint of institutions such as Riley Children’s Hospital, The Lilly Endowment and IU School of Medicine dating back several generations cannot be understated.

Business, civic and philanthropic leaders in the late 1960s and early 1970s crafted a vision around three key pillars: 1) Build a vibrant downtown (since you form your impression of a city based on its downtown); 2) Create a strong research university (what is now IUPUI – the largest research budget in the state); and 3) Provide a better range of opportunities for kids.

These three pillars arguably should still stand as we look to the next 50 years. We must continue to invest in the Mile Square and surrounding neighborhoods to attract good-paying jobs (Elanco) and talent to the city. We must continue to build onto IUPUI while also recognizing the immense strides made by Butler University, Marian University and UIndy. Additionally, we need to have an enormous commitment to the wellbeing of children in our city, especially those kids who are sad, hungry, lonely and vulnerable.

What is a compelling vision for the next 50 years of Indianapolis? What we are terming “Indy 3.0”?

Could we become a top ten city for economic mobility? While we rank in the bottom 10% of top 50 cities currently, can we focus on creating more equitable educational and workforce development pathways for all citizens? Can we finally brand our city boldly around a compelling narrative that leverages the strengths of the region (Marion County and surrounding counties) working together?

We are the best in the country when it comes to accessibility, mentorship and building a great career and life earlier than most other cities. How do we enhance the effective sports strategy (such as Techstars sports accelerator and e-sports initiatives) and double down on other core competencies such as the life sciences, advanced manufacturing, agriculture, software and healthcare innovation that will drive the jobs of the future?

The cultural strength of the community is vibrant and growing. A renewed investment in the arts and parks will continue to pay dividends as talent moves into the city.

As long-time civic leader Jim Morris says, “Leadership is seeing your opportunity in its largest context. Be part of an unselfish group of like-minded folks focused on the common good. Work together and you can cause remarkable things to happen.”

Let’s not make March Madness 2021 in Indy the culmination of our efforts, but rather the launching point for an inspiring new future that brings people together and lifts up all those in our city and recognizes everyone’s inherent dignity.

The character and spirit of our people is what sets us apart and that is something that cannot be replicated. Let’s use it to our advantage.

Morales is CEO at Morales Group. Neff is chief revenue officer at Prolific.