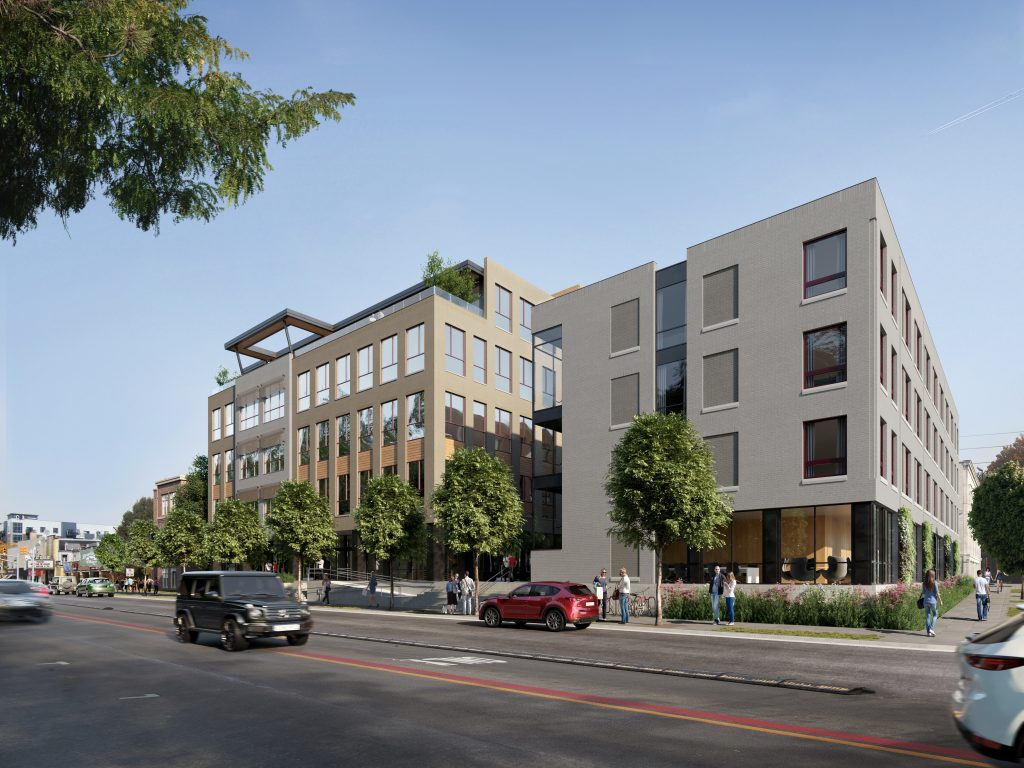 A local technology-staffing company is hoping to build a headquarters complex in Broad Ripple, with plans calling for a five-story office building and adjacent four-story apartment structure and underground parking garage at the northeast corner of College Avenue and 62nd Street.

Eight Eleven Group, which operates business units that provide IT and other employees to several industries, is expected to employ 200 to 250 full-time workers at the nearly 100,000-square-foot development, according to real estate industry sources, if plans come to fruition. The company, based at Keystone at the Crossing, did not respond to requests for comment on the development.

The project at 6207 N. College Ave. is being jointly developed by local firms Chase Development Inc. and Veritas Realty under the name Midtown Development Partners LLC. Representatives for the companies declined to identify the firm commissioning the project or disclose the development cost.

Eight Eleven Group got its start at 811 Broad Ripple Ave. in 2000 under the name Technical Youth. It is the umbrella group for IT staffing, consulting and support firm Brookstone, health care technology staffing firm Medasource and business professional staffing firm Calculated Hire.

Developers presented plans for the proposed development Tuesday night at a meeting of the Broad Ripple Village Association’s land use committee.

The two-building development is expected to be used almost exclusively by Eight Eleven Group.

A 52-foot-tall, four-story building immediately off the intersection will house up to 36 micro apartments and about 5,100 square feet of first-floor office space. Each of the upper three floors in the 28,170-square-foot building is expected to have 12 units—ranging from 309 to 411 square feet—with shared living and kitchen areas.

Most of the units are expected to be used by the company for customers and employees that are in town for business and training, the developers told the crowd.

The apartment structure will be separated from the larger, 69,600-square-foot office building by a plaza and the entrance for new for a subterranean, 49-space parking garage beneath the apartment building. The ingress and egress for the structure would in the one-way alley between College and Carrollton avenues.

In addition, the developers said they are working on an agreement to use at least 100 spaces in the Broad Ripple parking garage in perpetuity. The garage, built in 2012 for $6.4 million, is owned by Keystone Corp., and has generally been underutilized during daytime hours since it opened.

Veritas partner Kyle Hughes said many employees are also likely to use the Red Line, with a stop less than a block away, to commute to the office, and indicated the company would be open to working with IndyGo to secure passes for workers utilizing public transit.

The proposed development is expected to be built on a portion of the site previously eyed by local firm Buckingham Cos. for a proposed 146-unit apartment project. The plan was withdrawn earlier this year after failing to win support from the BRVA.

Unlike that project, however, the proposal for Eight Eleven Group received unanimous support from the nine-person land use committee—subject to conditions on certain commercial uses, as well as commitments that the developer would work with a neighboring property owner.

Outgoing City-County Council member Colleen Fanning, R-District 2, said she is fully supportive of the project, calling it “transformational” for the neighborhood.

“If we want to keep local businesses in Broad Ripple, this is the single most important thing that could happen … other than the redevelopment of the high school, which is way, way, way down the road,” said Fanning, who is also executive director of the BRVA but does not have a vote on the land use committee.

During Tuesday’s meeting, some residents raised concerns over parking and potential traffic congestion, including Glenn Ross, who owns the Lincolnshire Apartments directly north of the project site.

Ross said he not only has concerns about the proximity of the office building to his own 20-unit apartment building, but noted he does not believe the tenant’s employees and visitors will park in the Broad Ripple garage as planned.

Instead, he said, they’ll look for closer options, like surface lots or neighborhood streets—causing problems for area residents and local businesses. He added the the influx of traffic could create extensive congestion during rush hour, and that Broad Ripple won’t be prepared to cope with that headache.

Ross said he plans to meet with the developers on the project to discuss his concerns over the property sight lines, as the BRVA requested in return for its support of the project.

Following the meeting, Hughes told IBJ the project is expected to go before the city’s Metropolitan Development Commission in early January. He added the development partnership hopes to receive approvals in time to start construction in fall 2020.

Carmel-based Studio M is the architect on the project.