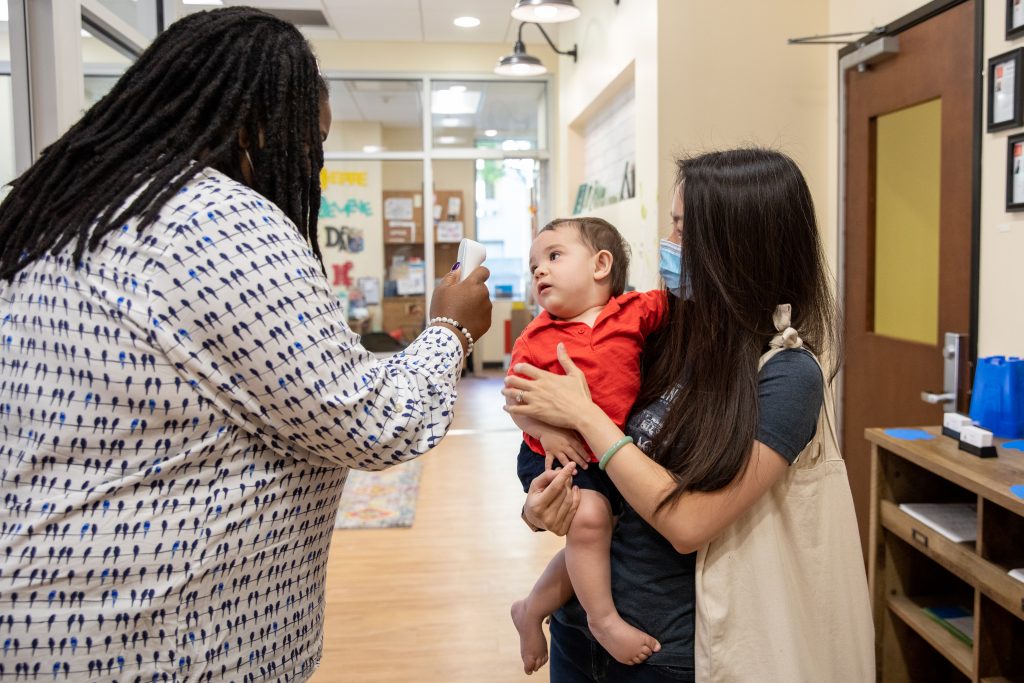 The child-care crunch triggered by the pandemic has rapidly become a crisis for many workers and companies that is hindering the economic recovery, disproportionately harming women, and threatening to leave deep scars for years to come.

A consensus is emerging among top economists and business leaders that getting kids back into day cares and schools is critical to getting the economy back to normal. And the American Academy of Pediatrics warned this week that keeping children out of school in the fall would threaten a degree of “social isolation” for children that could lead to mental and physical harm.

Yet many school systems are discussing only a partial reopening in the fall or remaining virtual, and up to half of America’s child care centers may shut permanently since they can’t survive financially, industry leaders warn, leaving families with even fewer options.

As parents struggle with this new reality, some employers are not showing much flexibility. Florida State University announced that effective Aug. 7, employees can no longer care for children while working remotely.

The impact of the lack of child care won’t be evenly distributed, say economists and other experts. While big companies might be able to provide white-collar workers with generous work-at-home flexibility, blue-collar and “essential” industries often can’t. That’s expected to disproportionately affect low-income women—who have already been hardest hit by the crisis—as well as smaller businesses.

Small business owner Bridget McGinty made the painful decision to close her restaurant in May, partially because she and many of her staff have small children they couldn’t find care for.

“I’m a single mom, and my son won’t be in school. It was just impossible to take on that much work physically and mentally of reopening,” said McGinty, who ran Tastebuds in downtown Cleveland for two decades.

McGinty is not alone. Eleven percent of the U.S. workforce—17.5 million workers—are taking care of young kids on their own and will be unlikely to return to work full time until schools and day cares fully reopen according to an analysis by the University of Chicago’s Becker Friedman Institute.

Large companies like Microsoft, Google, Medtronic and Evergy have expanded paid leave to make it easier on families struggling to find child care during this pandemic, but not all businesses have the resources to help.

“If schools don’t open, a lot of people can’t go back to work,” Jamie Dimon, chief executive of JPMorgan Chase, said in an interview.

Eliza Navarro was forced to quit her nursing job at a hospital in San Benito, Texas, when she couldn’t find child care for her two children. It’s been a devastating financial blow, but she felt out of options.

“I want to work, but because of everything that happened with schools and day cares closed, I wasn’t able to,” said Navarro, 33, a single mom who is the custodial parent. “I’ve been working since I was 17. I love working. I love my patients and my job.”

Thirteen percent of U.S. parents had to quit a job or reduce their working hours due to a lack of child care, according to survey of 2,557 working parents conducted by Northeastern University from May 10 to June 22. The survey found parents were losing an average of eight hours of work a week—the equivalent of a full day—because they had to address their kids’ needs.

Economics professor Alicia Sasser Modestino, who led the study that has not been made public yet, said even she was surprised how much of an effect child-care challenges are having on America’s workforce.

Parents who can work from home are struggling to produce the same amount of work while balancing child-care. As the mom of two boys under 6, Karin Brownawell has come to dread videoconferences.

In late March, on her first video chat with her top bosses, she told her sons to play in the backyard and not come inside unless it was an emergency. Ten minutes into the call, her 3-year-old burst into the kitchen and yelled at the top of his lungs, “Mom, I have to poop!”

She had to leave the video chat to deal with it.

“I’m way more productive when my kids aren’t there,” said Brownawell, 38, a licensed clinical social worker in Mechanicsburg, Pa. “It’s an anxiety roller coaster. You are trying to prioritize not just your workday, but your kids’ schedule.”

As stressful as it’s been, Brownawell is thankful she can work from the desk that’s wedged between her kitchen and living room. Her husband is an essential worker for the U.S. Postal Service and can’t alter his schedule.

Relief for parents like Navarro and the Brownawells looks unlikely until there is a vaccine.

Tom Wyatt, chief executive of KinderCare Learning Centers, said in an interview that his inbox is filled with parents begging him to find a place for their children. All 1,500 KinderCare centers are open now, but most classrooms are restricted to 10 children, down from 24 before the pandemic. With costs up and enrollment limited, the company isn’t making money. “Obviously, that is not sustainable,” he said.

“The child-care industry is going through a gut-wrenching challenge right now,” Wyatt said. “We literally have waiting lists at this point.”

Already, there were not enough day-care spots, and quarter of child-care workers—258,000 people—have lost their jobs. Wyatt says without aid from Congress in the coming months, thousands of day cares could close, exacerbating the crunch.

Industry groups are urging Congress and the Trump administration to approve $50 billion in federal aid to ensure child-care centers don’t go out of business and families, especially those looking for work, can afford to send their kids. Business leaders and economists have joined that call.

“The child-care industry supports all others. Without it, a lot of these other industries are not able to get back to where they need to be,” said Cheryl Oldham, vice president for education policy and the U.S. Chamber of Commerce.

The burden is falling heavily on women. Research shows that in “child-care deserts” where there aren’t enough day-care spots for kids, there’s a 12 percentage point drop in mothers’ labor force participation. There is no detectable impact on fathers. During this pandemic, more women have lost their jobs than men, Labor Department data show. Economists are deeply worried the pandemic will set American women’s job prospects back for years.

So far, Congress has allotted $3.5 billion for child-care help during the pandemic. That’s less than the emergency aid for Delta Air Lines, notes Haley Swenson, deputy director of Better Life Lab, a left-leaning think tank. Congress is also debating heavily whether to extend unemployment benefits beyond July 31, but many economists think child care is a bigger issue.

Almost a third of the U.S. workers have children under 18 at home.

It’s hard to put an exact dollar figure on how much kids interrupting their parents’ workdays is hampering the economy, but Nicholas Bloom believes the productivity loss is substantial. Most parents of young kids are ages 30 to 45, census data show, which are prime working years.

“You can’t run an economy with so many people aged 30 to 45 missing. It’s like the doughnut economy. You just have younger and older workers and none of the middle-aged people working,” said Bloom, a professor at Stanford Graduate School of Business.

Bloom is known for a study he did that found working from home makes workers way more productive, but he says that is not true during the pandemic. His study looked at 1,000 Chinese workers who did not have kids at home during working hours, a complete contrast to the situation now. Bloom himself has been attempting to work from home lately with four kids. (During a phone call with The Washington Post, he had to bribe his 4-year-old with TV and candy to be able to talk to a reporter.)

He’s also concerned about a drop in research and high-level thinking that tend to lead to breakthrough ideas. A study of 4,500 top scientists in the United States and Europe found a “sharp decline” in research during the pandemic. Child-care problems were the biggest factor.

In an early warning sign, new patent applications to the U.S. Patent and Trademark Office fell 9% this May vs. May 2019, the Information Technology and Innovation Foundation found.

Finding affordable child care has long been a problem in the United States, but the pandemic has caused a unique challenge: Families can no longer rely on grandparents for help.

Erin Palmer, 37, is an emergency room nurse in Salt Lake City. She works the 6 p.m.-to-6 a.m. shift and used to leave her 7-year-old daughter with her parents, but she the risks are too high to do that now. Palmer nearly quit her job as she struggled to find another option. An overnight babysitter on Care.com cost $30 an hour—more than she makes as an ER nurse.

In the end, Palmer’s younger brother and his girlfriend scaled back their work hours to help out, but it isn’t sustainable, she said.

“If schools don’t reopen in the fall, I don’t know what I am going to do. Mentally, emotionally, financially, I’m not prepared for that,” Palmer said.

Congress passed a law in March that was supposed to help parents who had no choice but to stay home to care for—and educate—their children get unemployment aid while schools and day cares are closed. Getting that money has not been easy for Navarro, the nurse who had to quit her job in Texas.

Navarro says she filed her first unemployment claim ever in April and received one payment. Then the money stopped. After days of calling, she learned Texas keeps marking her case as “under review.” She’s been saying a daily prayer to Saint Jude, the Catholic patron saint of desperate cases, that she can get another payment before July rent is due.

“Until this spring I was always able to pay all my bills. This pandemic has totally changed my life,” Navarro said. “My son just told me what he wants for his birthday, and for the first time, I might not be able to get it.”