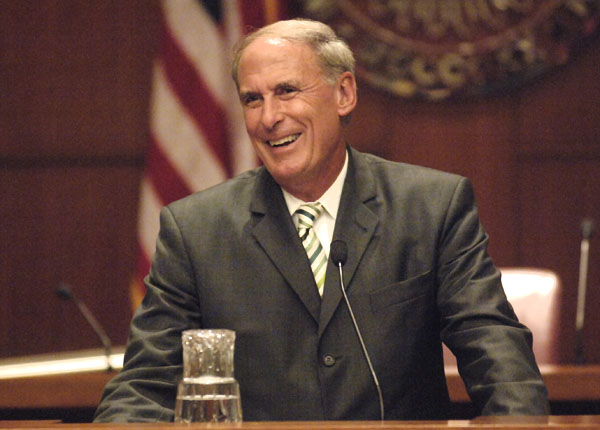 The president announced the personnel changes on Twitter and said he’d name an acting director shortly. Ratcliffe’s nomination will be subject to approval by the Senate.

“I am pleased to announce that highly respected Congressman John Ratcliffe of Texas will be nominated by me to be the Director of National Intelligence,” Trump tweeted. “A former U.S. Attorney, John will lead and inspire greatness for the Country he loves.”

Coats repeatedly disagreed with Trump on key national security claims for over two years, and the imminent departure of the former Republican senator from Indiana has been talked about for several months.

By contrast, Ratcliffe’s star is rising. The 53-year-old played a prominent role in last week’s House hearing featuring Robert Mueller, when the third-term lawmaker tore into the former Special Counsel as having violated “every principle and the most sacred traditions” of prosecutors by including in his report “potential crimes that were not charged.”

As the head of the U.S. intelligence community, the 76-year-old Coats has been a rare cabinet official willing to break ranks with the president publicly. A recent example was in January, at a congressional hearing where Coats and other intelligence chiefs contradicted the president’s statements on topics from North Korea to Islamic State.

It was a habit that drew praise from the Democratic chairman of the House Intelligence Committee. Amid reports in February that Coats was at risk of losing his job, Rep. Adam Schiff of California said in a tweet that Coats “speaks truth to power and gives policy makers the best intelligence possible.”

During the January hearing, Coats countered Trump’s assertion that Islamic State was defeated, testifying that “ISIS is intent on resurging and still commands thousands of fighters in Iraq and Syria.”

Defying the optimism exuded by Trump on North Korea, Coats said the government of Kim Jong Un is “unlikely to completely give up its nuclear weapons and production capabilities.” His assessment came weeks after a second summit between Trump and the North Korean leader, in Vietnam in February, broke up without agreements on denuclearization.

Coats also undercut the president on Iran, testifying that intelligence agencies believed Iran was continuing to comply with the the 2015 nuclear agreement from which Trump withdrew in 2018. Since then, following U.S. moves to ramp up sanctions on the Islamic Republic, Iran began enriching uranium beyond agreed-upon limits.

Trump lashed out at the Iran assessment at the time, writing on Twitter that intelligence officials “seem to be extremely passive and naive when it comes to the dangers of Iran. They are wrong!” Trump added: “Perhaps Intelligence should go back to school!”

“He has played intelligence straight down the middle,” Gordon said on the “Intelligence Matters” podcast. “The intelligence community is strong in part because of the way Dan has conducted his job. I don’t know that any DNI could have done in this time what Dan Coats has done and I’m proud to be a member of his team.”

In selecting Ratcliffe, Trump would be going in the opposite direction, choosing an intelligence chief who has shown a strong partisan leaning.

Interviewed Sunday on the Fox News Channel, Ratcliffe suggested he thought the special counsel’s probe of Trump sprang from a plot to frame the former New York real estate developer that originated by the administration of former President Barack Obama.

“They accused Donald Trump of a crime, and then they try and reverse-engineer a process to justify that accusation,” Ratcliffe said on “Sunday Morning Futures.” “It does appear that there were crimes committed during the Obama administration.”

Ratcliffe also said that Democratic Representatives Jerrold Nadler and Schiff, respective chairmen of the two House committees that held the Mueller hearing “are starting to look more like Laurel and Hardy.”

In July 2018, Coats criticized Trump’s decision to meet alone with Russian President Vladimir Putin in Helsinki, saying at the Aspen Security Forum in Colorado soon after that, “I would have suggested a different way, but that’s not my role, that’s not my job. So it is what it is.”

Told while on stage at the Aspen forum that the White House had tweeted Putin was being invited to Washington—a trip that never occurred—Coats said sardonically, “That’s going to be special.”

Coats was a low-profile chief of the intelligence community, often leaving the spotlight to the leaders of the better-known Central Intelligence Agency: Michael Pompeo at the start of Trump’s administration and, after he became secretary of State, Gina Haspel, the CIA’s current director.

Yet when Coats made public comments, they nearly always defended the independence of the intelligence community.

In May, Coats addressed concerns that Trump’s order telling the intelligence community to share classified documents about the start of the Russia probe with the Justice Department could result in national security secrets becoming public. He said he was confident that “long-established procedures” to safeguard the information would be followed, and he vowed to keep providing “apolitical intelligence” to the president.

Coats’s pending departure comes amid renewed turmoil on Trump’s national security team and broader cabinet. The administration has no confirmed deputy defense secretary, United Nations ambassador or homeland security secretary. Labor Secretary Alex Acosta resigned on July 12 after coming under fire for his handling of a decade-old sex crimes case against investor Jeffrey Epstein, who faces new charges for trafficking girls as young as 14 for sex.

Axios reported this month that Trump isn’t convinced the Office of the Director of National Intelligence, created after the Sept. 11 terror attacks, is even necessary. But the office was created by Congress and can’t be abolished by the president.

Coats was a well known quantity in Washington long before taking on the role coordinating the work of the federal government’s more than a dozen intelligence agencies. He served as an Indiana congressman and then senator from 1981 to 1999, stepping down because of a term-limits pledge.

He returned to the Senate in 2011 and became a member of the Finance, Intelligence and Joint Economic committees. He also served as U.S. ambassador to Germany and worked as a lobbyist for companies such as General Electric Co. and Alphabet Inc’s Google.

His most high-profile divergence from Trump came after the president’s 2018 summit with Putin in Helsinki, where Trump seemed to give more credence to Putin’s denial that Russia meddled in the 2016 U.S. election than the findings of “my people,” including Coats.

Before the returning president’s plane even landed in Washington, Coats fired off his response.

“We have been clear in our assessments of Russian meddling in the 2016 election and their ongoing, pervasive efforts to undermine our democracy, and we will continue to provide unvarnished and objective intelligence in support of our national security.”

One thought on “Dan Coats resigning as director of national intelligence”