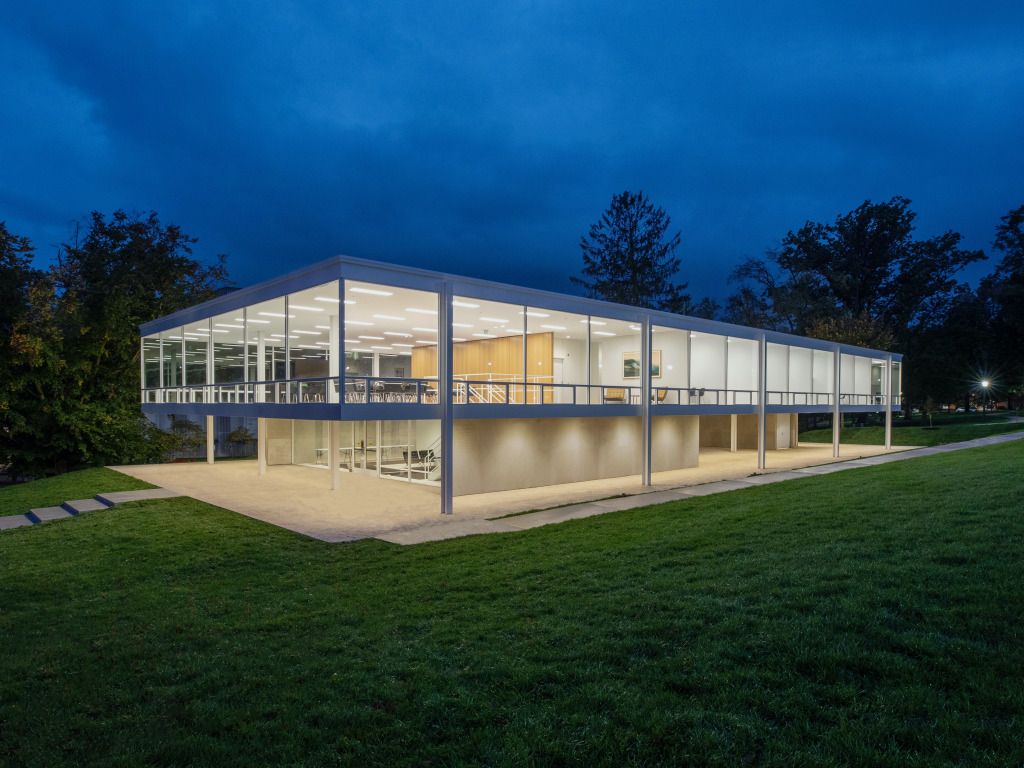 If philanthropist Sidney Eskenazi had not been a member of Indiana University’s Pi Lambda Phi fraternity in 1952, Bloomington likely would not be the home to a newly constructed building designed by famed architect Ludwig Mies van der Rohe.

The fraternity hired Mies, a pioneer of modernist architecture who served as director of the Bauhaus art school before he left Germany in 1937, to design Pi Lambda Phi’s residence building near the intersection of 3rd Street and Indiana Avenue south of Dunn’s Woods.

That plan didn’t work out, and neither did an alternate site on Jordan Avenue (now known as Eagleson Avenue), according to Peg Faimon, founding dean of IU’s Eskenazi School of Art, Architecture + Design.

And so the plans sat unused for decades, until they were revived for the architecture school. The glass-and-steel elevated structure—called the Mies van der Rohe Building—opened in February. A public open house is scheduled 4 to 5 p.m. on April 8.

The building is a new structure with a 70-year history. After the fraternity opted not to move forward with the building, the plans were set aside. Some of the documents landed at the Mies archives at New York’s Museum of Modern Art, where they were found in a of Daniel Brenner, an associate of Mies who also worked on the fraternity project. Other documents landed at a Mies archives in Chicago, where the architect led the design department at the Illinois Institute of Technology.

A mission to track down the plans began in 2013, when Eskenazi, founder of Sandor real estate development company, reminisced about his fraternity days to then-IU president Michael McRobbie. Faimon approximated Eskenazi’s part of the discussion as, “Did you know, Michael, that there was a project designed by Mies van der Rohe for the Indiana University campus?”

The historical footnote captured McRobbie’s imagination and led to sleuthing in Chicago and New York for information about the plans. Once the plans were reunited, IU decided to move forward with using them for a new building for the architecture school. And Eskenazi agreed to fund its construction.

His family gave a $20 million gift to name the School of Architecture and Design, Faimon said, with $10 million committed to the building. An endowment will be used for building maintenance.

Faimon said she appreciates the building’s placement at the northwest corner of Eagleson Avenue and 7th Street on IU’s campus.

“It has enough space around it to be the gem and jewel that it is, especially at night—it glows beautifully,” she said.

Essentially a single-story structure, the Mies building is elevated by an entrance lobby and exit stairs. Floor-to-ceiling windows wrap around the entire elevated portion, with a square atrium in the middle. To modernize the original Mies plans, the building has double-pane windows, air conditioning and an elevator.

The architecture school shares attributes with one of Mies’ signature buildings, Farnsworth House, which is found on the western outskirts of Chicago’s suburbs in Plano, Illinois.

Built in 1951 (and immortalized in miniature as a Lego Architecture set in 2011), Farnsworth House also has a white steel frame, dominant windows and an elevated perch.

But at 10,000 square feet, IU’s Mies building is more than six times the size of Farnsworth House.

Faimon works in a corner office of the architecture building, where she describes a sensation of hovering above ground.

Real estate developer Joseph Cantor hired Mies to design a drive-in restaurant and a home in Indianapolis. Commercial builder Harry Berke unveiled designs by Mies for a glass-dominated four-story office building at the southwest corner of Meridian and Michigan streets and a similar 12-story apartment building at 37th and Meridian. And Cantor initially connected Mies with Pi Lambda Phi.

Until now, none of these structures were built.

The April 8 open house is free to the public. Mies biographer Edward Windhorst and project architect Stephen Dayton of Thomas Phifer and Partners are expected to attend. For more information, visit indiana.edu.