As a $24 million mixed-use development in downtown Noblesville moves through the planning phase, the developer is making changes to the building’s design to ensure it blends with other historic buildings.

Simultaneously, a third-party report has determined that demolishing buildings currently on the site would not adversely affect the overall character and integrity of the historic district.

In August, the city and Fishers-based Rebar Development unveiled plans to build downtown Noblesville’s first new apartments in more than a century. The project, to be called The Levinson, would provide housing, commercial space and a public parking garage on the half block bordered by Eighth and Ninth streets, Maple Avenue and the east/west alley south of Conner Street. 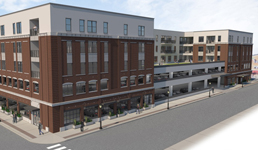 CLICK IMAGE FOR LARGER VIEW: The developer of The Levinson has tweaked its design to incorporate some of the design features of the buildings that it will replace. (Image courtesy city of Noblesville)

Almost immediately following the city’s announcement, residents voiced concerns about the building standing out in the historic downtown, which hasn’t seen new construction in 11 years.

From the beginning, Rebar and the city have said they would strive to ensure the new construction fits in with surrounding properties and does not take away from downtown Noblesville’s historic feel.

City leaders hired RATIO Architects to conduct both architectural/historical and existing condition assessments of three privately-owned buildings and a garage at the northwest corner of South Ninth Street and Maple Avenue that would be removed to make way for the project. The buildings, which were built in the late 1800s, are listed in the National Register of Historic Places as contributing resources to the Noblesville Commercial Historic District.

Ratio’s report determined that “although the three historic buildings that are the subject of this report were designated as contributing resources within the district, by virtue of their date of construction, it is our opinion their removal should not adversely affect the overall character and integrity of the district.”

That’s because historic architectural features such as pediments, storefronts and door and window openings have been lost or modified over the years, the report states. The buildings “have lost most of their immediate historic context and setting due to previous demolitions on the block. Those actions have left the buildings isolated and out-of-scale with the historic buildings to the north and east.”

Meanwhile, Rebar has tweaked its design (click on image above for larger view) since the project was first unveiled to further incorporate some of the design features of the buildings that would be lost.

Changes include more limestone, a stone base and arched windows.

The changes were well received by city council members, who expressed appreciation for Rebar’s willingness to consider residents’ suggestions.

“This is moving in the right direction,” council member Greg O’Connor said at the meeting. “You’ve incorporated a lot of the things we saw in the existing building. You’re trying to make it as authentic as you can.”

Council President Chris Jensen said further changes will likely be suggested as the project moves through the planning process. Its next stop is the Noblesville Plan Commission, which will need to approve a detailed development plan for the site.

A commission meeting is scheduled for Jan. 22.