Home » Blogs » The Dose » Tracking Indy’s mosquitoes, one ditch at a time

It’s not even 10 a.m., but the sun is beating down along on an open stretch of road near the Indianapolis International Airport. It rained overnight and the air is hot and thick – perfect breeding weather for mosquitoes.

My 20-year-old son, Steven, a summer worker for the Marion County Mosquito Control program, grabs a long-handled, plastic dipper from a truck and walks over to a roadside ditch. 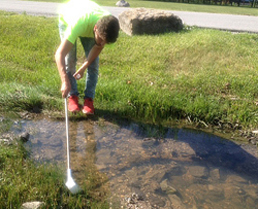 Steven Russell's investigations include scooping up and examining rain water.

He scoops up about a cup of rainwater, raises it to his eyes and spots something tiny wiggling around in the dipper. It’s mosquito larvae, swimming in circles.

There are 46 different species of mosquitoes in central Indiana, and they can carry deadly diseases such as West Nile virus. They can also breed quickly in huge numbers, creating a maddening, blood-sucking nuisance for people trying to work, play or relax outside.

So every weekday, about two dozen Marion County mosquito control technicians, including Steven, fan out around the county, trying to keep tabs on where the mosquitoes are breeding. 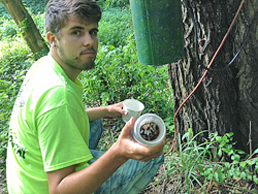 They examine mosquito traps placed in woods, on farms and along roads. They collect dead bugs from the traps and take them back to the lab to test for diseases.

On other days, they pick up thousands of discarded tires along roads and in alleys that can become breeding grounds for the blood-sucking insects.

And they spend hours every day hiking along ditches, looking for standing water, home to mosquito larvae. Once they find larvae, the technicians start the real work.

On Tuesday, I spent a few hours shadowing Steven to see how the job was done. This is his first summer on the job, and he’s just trying to earn enough money to help him get through Indiana University, where he’s studying computer science. The job pays about $10 an hour. (Disclosure: I cover local and state health departments, but Steven found the job on his own, without my help.)

But even though he’s new, he spent several days in training and has turned into a fledgling mosquito expert fairly quickly. He can tell you the difference between floodwater mosquitoes (a group called “aedes,” which usually hatch in heavy rains) and the mosquitoes that hang out in deep ditches, old tires, gutters and bird baths (a group called “culex,” which are thought to carry more diseases).

Steven looked again at the dipper pull of water and larvae. Using a medicine dropper, he plucked a few larvae from the ditch water in the dipper to take back to the laboratory.

“This looks like a real breeding ground,” he said. 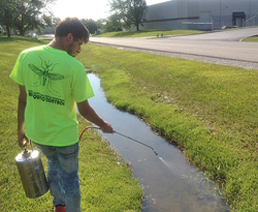 Spraying larvae with mineral oil can suffocate them.

Then he sprayed a mist of mineral oil into the ditch. The oil covered the surface, suffocating larvae that would try to come to the surface for air.

But he was just getting started. The ditch stretched down the road for hundreds of yards, surrounded by soggy grass. Under the hot sun, Steven hiked alongside, spraying oil, while keeping an eye out for dogs and traffic.

Then he put the spray can and dipper back in the truck and headed for the next street and the next ditch.

For seven or eight hours a day, he will walk up one road and down another, peering into ditches and taking notes.

It’s a laborious job, with lots of scurrying up and down muddy ditches. Along the way, Steven recorded information on the number of larvae spotted, the dead bugs collected from traps, how much water was collected in rain gauges and even the amount of oil used.

All this information goes into a huge database that can show health officials how large the mosquito population is from year to year. It also provides clues on where they are breeding, and where the viruses are popping up. The county has thousands of sites in its database.

Three weeks ago, the health department found the first mosquitoes of the season carrying the West Nile virus. A sample of mosquitoes testing positive was collected from a surveillance trap in Warren Township. That happened about a month earlier than usual.

“With several of these mosquito-borne diseases, we tend to see it more in the second half of the summer, in the very hot, very dry conditions,” said Terry Gallagher, program supervisor.

No human cases of the virus have yet been reported this year in Marion County. But the disease can be deadly, with one death reported in 2012.

So far this year, the mosquito population has been a little below average, especially for the floodwater mosquitoes, Gallagher said.

“But that’s going to change with all this rain,” he predicted. “Give it another week or so, and we’re all going to notice more mosquitoes, so hang on.”

And that’s when you might notice the fogging trucks rolling through your neighborhood. Machines on the back of the truck emit an ultra-low-volume fog, spraying about five ounces a minute of insecticide, while the trucks creep up and down streets at about 10 mph.

The fog creates about a 300-foot swath in the back of the truck that hangs in the air for about 10 minutes, Gallagher said. Any mosquito that flies through it is likely to die.

“It’s our last attempt to control mosquitoes,” he said. “Honestly, it the most expensive way to go about it, and it’s probably the least effective. But it’s a service we provide.”

Marion County started its mosquito program in 1976, following an outbreak of Saint Louis encephalitis, a rare disease caused by a virus spread by infected mosquitoes. That outbreak lasted for only a few seasons.

The next big mosquito event occurred in 2002, when the county had its first big exposure to West Nile virus, a serious disease that can cause inflammation of the brain, along with the lining of the brain and spinal cord.

Unlike Saint Louis encephalitis, which disappeared from here several decades ago, the West Nile virus has stuck around and a few cases pop up almost every year.

Now, the next big headline could be the Zika virus disease, a serious malady spread primarily though the bite of an infected mosquito, which can cause birth defects. But so far, Gallagher said his program has not seen any of local transmission. The few reported cases here have all been from people traveling out of the country.

“But that’s the one everyone’s talking about right now,” he said. “We’re keeping an eye out for it.”

Steven drives a county Mosquito Control truck and wears a bright-green T-shirt with a huge image of a mosquito on the back. Once in while, while he's spraying a ditch or stopped at a stop light, a stranger will ask him about Zika. He said that's the most common question he gets. He tells them the county hasn't seen any signs of mosquitoes carrying Zika.

After a few hours of tagging along with Steven, I decided to head back to work to write a few stories. I’ve always thought my job could be stressful, but I was grateful to be returning to the indoors, free of bugs and muggy air.

Steven, who started his shift at 7 a.m., would stay out in the field for hours. He walked back to the truck. There would always be another ditch and another puddle.