Home » Blogs » North of 96th - Lindsey Erdody » Who’s responsible for what? Breaking down Westfield’s contract with the Colts

The city of Westfield’s 10-year contract to host the Indianapolis Colts' training camp at Grand Park Sports Campus beginning in July 2018 could mean a lot for the northern suburb, but the city also has its fair share of work to do in order to reap the benefits.

According to the contract, the city will receive a total of $653,000 from the Colts—a one-time payment of $123,000 plus an additional $53,000 per year. The city can also charge for and keep the revenue from parking and concessions at Grand Park.

The contract requires the city to provide an audit of revenue and direct expenses after the 2019 training camp and every year after that. If the city’s net revenue is less than $100,000, the Colts will pay the difference.

That means a guaranteed $1 million in net revenue over the 10-year period.

But the city is also on the hook for providing a plethora of other items and services outlined in a roughly three-page checklist attached to the contract. 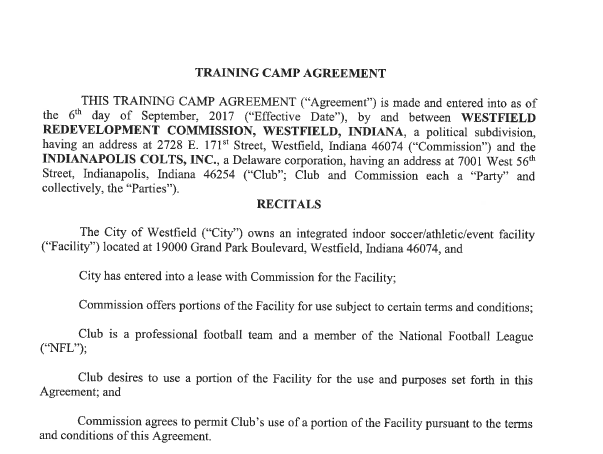 (Click image to the right to see contract and checklist.)

The contract gives the Colts full and exclusive access to the indoor soccer complex known as the Grand Park Events Center, except for three office suites that may potentially be excluded. But the contract says if those three areas are unavailable, then the city—at its own expense—would have to construct comparable meeting spaces within the events center.

The three potentially excluded areas are currently occupied by NinjaZone, the Indiana Soccer Association and Indiana Sports Properties. All of the leases continue through at least 2021.

An equipment room, weight and conditioning room and training room would also be added to the center during the camp.

And while the Colts are responsible for an agreement with the nearby 152-room Cambria Hotel & Suites, the contract stipulates that at least 200 total beds “must be reasonably adjacent to the practice fields and the events center.”

If such lodging isn’t available in any given year, the Colts can terminate the agreement as long as it does so before April 14 of the year it wants to end the deal.

“… however, [the Colts] will negotiate in good faith for such housing and provide [the city] with reasonable advance notice and an opportunity to find acceptable replacement housing for [the Colts] prior to terminating this agreement,” the contract reads.

Here’s a breakdown of some of the other items each entity is responsible for providing.

According to the contract, Westfield is on the hook for the following:

What the Colts are on the hook for:

What they’re both responsible for: