The Westfield City Council unanimously approved a zoning amendment Monday night that paves the way for the mayor’s nephew to construct a baseball training facility at Grand Park Sports Campus.

The 65,000-square-foot multi-sports training facility proposed by Pro X Athlete Development and EdgeRock Development would be built directly to the west of the indoor soccer arena known as the Grand Park Events Center on 191st Street. 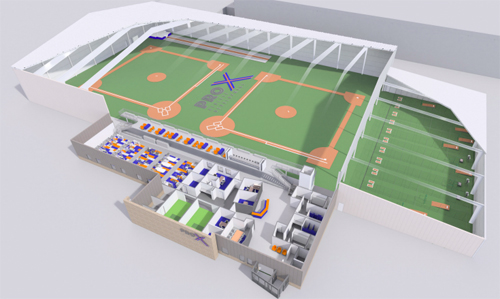 Former Major League Baseball player Joe Thatcher is the founder and owner of Pro X, which opened earlier this year in Westfield.

The estimated $5.5 million to $6 million facility would feature 44,000 square feet of open turf that could be divided into smaller sections, a 3,000-square-foot state-of-the-art weight room, two rooms with golf simulators, 10 to 12 full-length batting cages, a viewing mezzanine, offices and rehabilitation space.

The city issued a request for proposals in July for the 5.3-acre lot, and received one response from Pro X Athlete Development and EdgeRock Development.

Since then, owners of another local baseball training center voiced concerns about the deal. Sue and Chris Estep of RoundTripper Baseball Academy in Westfield told IBJ that they met with Cook to discuss the possibility of relocating to Grand Park before the RFP was issued.

The Esteps said they were not notified of the RFP, and they did not see the public notices published in two newspapers.

The city has said it handled the RFP like any other. City officials also say no public dollars will be involved with the project, except that Westfield will continue to own the property and collect lease payments from Pro X.

The zoning amendment also doesn’t mean the city has formally accepted the proposal from Pro X, but it would allow the project to start construction if and when a deal becomes finalized.

A city spokesperson previously told IBJ that Cook has recused himself from the process and has not been involved in the negotiations.

The only comments from city councilors related to the rezoning request Monday night revolved around the architectural standards for the proposed facility.

“For the most part, I don’t want to see this reproduced across Grand Park,” city councilor Cindy Spoljaric said. “I don’t think it is doing long-term justice.”