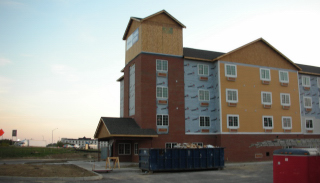 A $600-million plan to revamp interstates 465 and 69 on the northeast side could have a major impact on buildings near the highways. Several properties, including a couple of office buildings, some self-storage units and a few residential units, are slated for “relocation” in preliminary Department of Transportation plans. But the most drastic example is a new Suburban Extended Stay Hotel (pictured here) now under construction on Bash Street south of 82nd Street, within shouting distance of I-69 South. The hotel is listed as a “potential relocation” in the plans, and it hasn’t even opened. Poor planning? Read Chris O’Malley’s story.