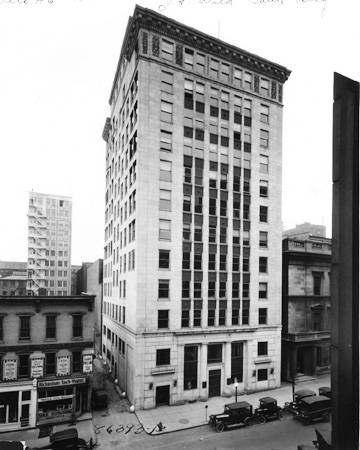 A local firm has begun renovations on an historic 12-story former bank building at 129 E. Market St. Crown Property Group bought the J.F. Wild & Co. building from Flaherty & Collins Properties for about $750,000. The deal closed two weeks ago, and Crown already has moved its offices into the building’s first floor. The company has begun efforts to lease the mostly vacant building, which property records show was built in 1904. (Image is circa 1920s from the Indiana Historical Society.) Crown Property Group, which is privately held, also owns two other historic buildings along Market Street between Pennsylvania and Delaware streets: the Stock Yards Bank & Trust Building and the Barrister Building.