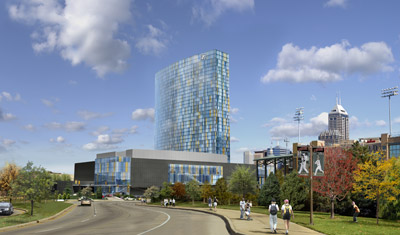 A three-year project to build a new convention headquarters hotel along West Street now is scheduled to begin on June 1, immediately after the Indianapolis 500, said Mike Wells of developer REI Investments, which is working with White Lodging on the project. The first order of business for the $425-million JW Marriott development: Partial demolition of an existing Courtyard by Marriott and closure of a TGI Friday’s restaurant. The development team has sent out bids for the work. Wells said renderings of the hotel’s interior will be available soon. Stay tuned.