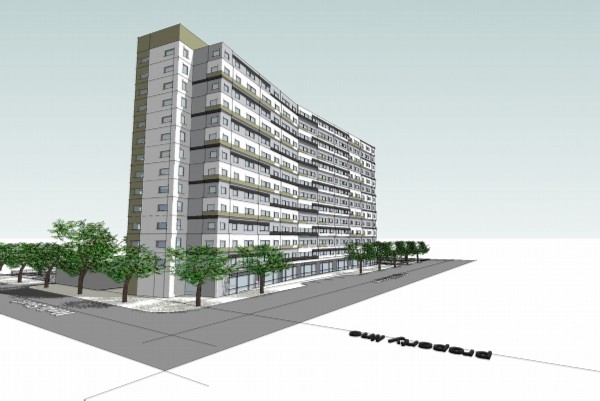 A development team is redesigning plans for a 16-story student-housing tower it hopes to build on a 2.3-acre site a few blocks east of the Central Canal. The developers, a partnership of Fishers-based Paramount Realty Group and Indianapolis-based Alboher Development Co. Inc., are making changes requested by the city’s planning staff. The city wants the developers to redesign the faÃ§ade (Original rendering shown here, click for a larger version) and move the $40 million tower closer to Michigan Street to provide easier bus access to campus. The project, dubbed Paramount Tower, would replace a parking lot east of Capitol Avenue between Michigan and North streets. A hearing on the proposal is scheduled for May 13, but the developers expect to request at least one more continuance, to June. The project architect is Browning Day Mullins Dierdorf. IBJ first reported the plans in November.