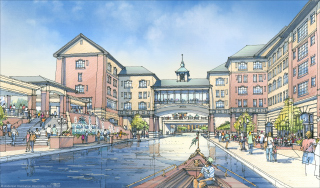 A 1-acre site along the Central Canal will not be developed, at least for now, a state official said in an e-mail. The state’s public finance director, Jennifer Alvey, said the Indiana Finance Authority no longer is pursuing a development project on the state-owned property, which sits between Ohio and New York streets across from the Indiana Historical Society. The decision appears to hand a big victory to a small environmental group bent on saving the unremarkable, grass-covered hillside from development. The land abuts a state parking garage and was set aside for a future development that would draw retail life to the Canal and more people downtown. The e-mail from Alvey seemed to pass the decision to the city. “The IFA has determined that a partnership with the City is important to the future of this site. The City continues to evaluate the current options for the site. The IFA appreciates your concerns related to this property.” Kansas-based LodgeWorks LP pitched a hotel, restaurant and retail project that would include a bridge over the canal (shown here). Browning Investments and Dora Brothers Hospitality also pitched a hotel and retail space.