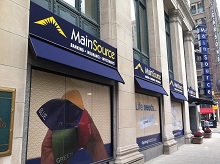 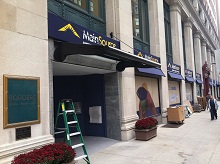 The bank is set to open within the next few weeks in part of the former home of Borders. Already, the MainSource name appears on nine awning signs along Meridian and Washington streets and on a large vertical corner sign. MainSource plans to operate a full-service retail bank branch in a 4,000-square-foot space on the first floor and a commercial banking and financial advising operation in 5,500 square feet on the second floor. The space has been vacant since early 2011, when the book retailer Borders Group Inc. closed the store as it went through bankruptcy. An earlier story is here. Savvy branding or sign pollution?

UPDATE: The city's planning department approved six awning signs for MainSource, not the nine signs the bank has installed, according to the approval document. Senior Planner Jeff York said he asked the bank to resubmit updated plans that reflect all of the signs. He noted the signage is not unusual for downtown, pointing to the National Bank of Indianapolis awning signs at the northeast corner of Market and Pennsyvania streets.

The law firm Barnes & Thornburg, which owns and has its headquarters in the building, has not signed a tenant for the remainder of the 22,000-square-foot Borders space. Real estate industry sources say Barnes & Thornburg has decided against filling the space with a restaurant or other outside user. Instead, plans call for a new upscale lobby for the high-powered law firm.