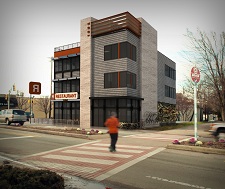 plans to construct a three-story building with first-floor retail and two floors of office space just north of Broad Ripple Avenue sandwiched between Winthrop Avenue and the Monon Trail. An existing building on the triangle-shaped property previously housed a United Package Liquors store and would be demolished. Privately held Lor Corp., which also owns the liquor-store chain, has owned the prime Broad Ripple site since 1988. In December, Lor moved the liquor store to its Broad Ripple Station shopping strip to the immediate southeast. The plans for 1002 Broad Ripple Ave. call for a rooftop deck and a large bike rack on the side of the building facing the Monon Trial and more bike parking on the north side of the building, said Lor CEO Adam Hill. Lor filed its plans with the city this week and plans to start construction as soon as it can secure zoning approvals. Hill declined to disclose the project's cost. He said the firm is close to signing a restaurant to take the first-floor space but hasn't done much marketing yet toward leasing the office space. The 9,300-square-foot building would have roughly the same number of parking spaces (all behind the building) that serve the current one-story structure; Broad Ripple's new parking garage should be finished by the time 1002 Broad Ripple Ave. is complete. "Our plan was to improve the image of Broad Ripple Village, while respecting the Monon Trail and its users," Hill said. The architect is locally based Blackline Studio. What do you think?