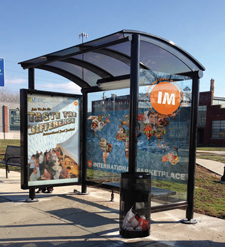 The area surrounding Lafayette Square Mall on Indianapolis’ northwest side hasn’t exactly been a magnet for redevelopment lately. Plagued by store vacancies and a fair amount of crime, the mall no longer serves as an anchor for the struggling neighborhood. But city officials hope to change that with a long-term plan (first phase to be unveiled Monday) to rejuvenate the area around 38th Street and Lafayette Road. The idea is to rebrand it International Marketplace by instead capitalizing on the influx of independent, ethnic businesses in recent years. “We’re trying to address the store vacancies and support those businesses there,” said Ryan Hunt, senior project manager for the city’s Metropolitan Development Commission. “There was a recognition to do something.” The city plans to start this summer by making streetscape and sidewalk improvements, in addition to replacing or repainting four neighborhood bus shelters. The plan recommends repositioning obsolete properties using $11 million in municipal bond proceeds. The bonds are backed by Community Revitalization Enhancement District funds, which are available thanks to the city’s decision in 2004 to make the area a redevelopment district. The designation allows reinvestment of up to $750,000 a year in sales taxes between 2009 and 2024. The public can view the first-phase improvements from 6:30 p.m. to 8 p.m. Monday at New Wineskin Ministries, 4501 W. 38th St.