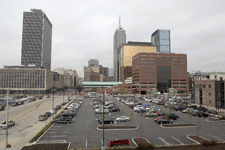 One of six bidders responding to a city request to redevelop a downtown parking lot where Market Square Arena once stood is proposing a mixed-use project stretching 52 stories, potentially the tallest building in the state. Mayor Greg Ballard tweeted the news Monday afternoon after the city’s deadline to receive proposals passed earlier in the day. All six bidders proposed mixed-use projects ranging in size from eight to 52 stories. By comparison, downtown's Chase Tower has 48 stories. City spokesman Marc Lotter declined to name the bidders or provide more details, saying Ballard is just beginning the process of reviewing the proposals. “We’re very excited that it drew such strong interest,” Lotter said. IBJ reported in its April 22 issue that city officials would have at least four proposals to consider. Executives from locally based Browning Investments, Flaherty & Collins Properties, Keystone Group and Milhaus Development told IBJ during an informal survey of potential bidders that they intended to submit proposals, which were due by April 22. Proposals were expected to include a high-rise building well beyond four stories above a major retail component on the ground level, according to a city fact sheet. The renewed interest in the site, where previous attempts at redevelopment in 2004 and 2007 failed, comes after Indianapolis Mayor Greg Ballard called for new proposals during his State of the City speech in March. What’s different this time is that the city is starting with just one piece of the former arena site instead of the entire portion in hopes that a smaller development might have a better chance of succeeding. The targeted property is the northern 1.96 acres directly east of the Indianapolis City Market at the northeastern corner of Market and Alabama streets. The area is now segmented into parking lots from Washington Street north to Wabash Street. City officials hope a project on the northern part will help generate demand for future development on the southern section.