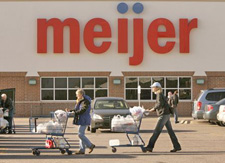 It looks as though the long-anticipated Meijer store within Duke Realty Corp.’s Anson development near Whitestown will finally be built. A government construction filing shows the store is expected to be 192,940 square feet and employ 100 people, according to the filing. It would have a Zionsville address and be located at 6650 Whitestown Parkway. Meijer has owned the land near State Road 334 and Interstate 65 in Boone County since 2008 but delayed construction until the economy improved. Homebuilding has picked up recently within Anson, and two residential developments along 334 east of Anson might have convinced Meijer to pull the trigger on the project. In addition, a Hampton Inn hotel is under construction within Anson. It’s unclear when construction might start. Officials at Duke Realty and Meijer didn’t immediately return phone calls. It’s doubtful the store would open this year, however. Meijer’s website lists six store openings expected in 2013, and the Anson location is not among them. In Indiana, Meijer stores are slated to open this year in Portage and Warsaw, according to the website. Meijer, based in Grand Rapids, Mich., operates 199 supercenters in Michigan, Illinois, Indiana, Ohio and Kentucky.