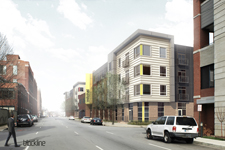 Milhaus Development won design and rezoning approvals Wednesday to begin construction this summer on a five-building, $26 million apartment project in the Chatham Arch area downtown. The development (south of Massachusetts Avenue and north of North Street on the east side of College Avenue) will include 236 units ranging from studios to three bedrooms. Monthly rents will run between $900 and $2,000. The project will include the construction of four new buildings four to five stories tall and the complete renovation of the historic two-story former office building of the Mitchel & Scott Machine Co. The building will include the leasing office and apartments with rooftop patios.  About 7,000 square feet on the ground level could be developed as either residential or commercial space, Milhaus said. The first apartments should be available in the spring of 2014. The project’s design is a collaboration of Milhaus, Blackline Studio for Architecture, Anderson + Bohlander Landscape Architecture and CEC Engineering. This is Milhaus’ fifth project in the past three years. The others are Mozzo on Virginia Avenue, Solana Apartments at the Crossing near Keystone at the Crossing, Artistry within the former Bank One Operations Center and Penn Circle Apartments in Carmel. Milhaus also has bid to redevelop the former Market Square Arena site.