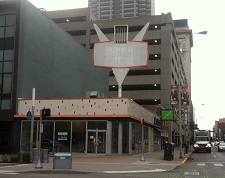 A prominent local developer is buying the downtown building that last housed a Dunkin Donuts and has plans to renovate it to make it more attractive to an upscale eatery. Several local real estate sources say Keystone Group CEO Ersal Ozdemir is close to purchasing it from a private, out-of-state seller. His plans for the building at the high-profile corner of Washington and Pennsylvania streets include adding a second story in hopes of luring a national restaurant. Ozdemir said during the International Council of Shopping Centers annual convention in Las Vegas that he has “interest” in the building but never comments on speculation. Retail brokerage Midland Atlantic is shopping the site and has the property under contract with a potential buyer, broker Patrick Boyle said. The purchase could include the adjoining space currently occupied by Cartridge World, which would be the “ideal scenario,” he said. “The most likely use is a restaurant that could justify [the cost of] renovation,” Boyle said. One thing is certain: The iconic sign atop the building can stay, according to grandfathered city zoning laws. The entire space is 2,800 square feet. Dunkin Donuts closed the location at 48 E. Washington St. in late March when its lease expired.