Property Lines’ latest roundup of restaurant and retail activity includes a couple of new downtown pizza joints—one that’s not open yet and another whose fans have been craving its arrival for months. 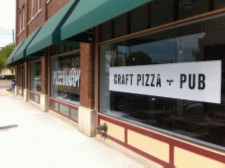 • Pizzology opened Monday at 600 Massachusetts Ave. in the former Aesop’s Tables space. Owner Neal Brown also took the space next door on Mass Ave, giving him a total of 3,600 square feet. That’s about 700 square feet more than Brown has at his Carmel pizza restaurant, which he launched in 2009.

Pizzology posted on Twitter Monday that both locations would only be open for lunch that day to give staff time to celebrate the occasion.

• 3 Sisters Cafe in Broad Ripple is moving from its longtime location at 6360 Guilford Ave. south to 6223 Guilford Ave., another residence converted for commercial use. The property 3 Sisters is moving to was bought by Monon Housing Partners LLC last month as part of a package that included the historic Mustard Hall.

• Ruth’s Chris Steak House has set an opening of Aug. 18 for its restaurant that will occupy first-floor space at the Ironworks development on the southwest corner of 86th and Keystone Avenue. The steak house will close its current northside location near Keystone and East 96th Street.

The company also expects to open locations this summer at 4225 E. 82nd St. in the Lake Clearwater area and at 2342 W. 86th St. in space formerly occupied by Kahn’s Fine Wines & Spirits near North Willow Farms.

• Brenner Luggage is closing its northeast side location at 8730 Corporation Drive, near Interstate 69 and East 96th Street, on June 7. Brenner opened the store in 2001 upon closing its downtown location on South Meridian Street.

Brenner’s store in Fashion Mall Commons next to Kohl’s will be the 100-year-old company’s lone remaining location.