A local restaurateur with a large Mass Ave presence wants to open a test kitchen and restaurant on East New York Street downtown.

What’s unknown, however, is whether the aging building that last housed Amici’s Italian Restaurant stays or a new building is constructed on the property at 601 E. New York St. 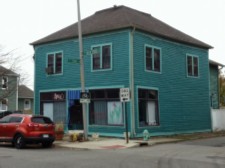 Mike Cunningham, whose Mass Ave restaurants Mesh, Bru Burger and Union 50 all have opened within the last five years, said he is buying the building from business partner Patrick Heitz in hopes of opening a 100-seat eatery where chefs from his stable of restaurants can test and refine recipes.

On Tuesday, Heitz presented plans for preliminary review to the Indianapolis Historic Preservation Commission to tear down the building on East New York Street and construct a new one.

IHPC members took no action, but it quickly became evident that they would not support a total demolition of the building that dates to the late 1860s.

“You’re going to need to make an extremely compelling case to the commission … to convince us that this is a building that just cannot be saved,” IHPC Chairman and Ratio Architects Inc. founder Bill Browne said.

Heitz and structural engineer Dan Johnson of JBE Structural Solutions in Noblesville told the commission of the building’s severe structural deficiencies that would make a renovation very challenging.

“I’m never going to support you tearing this building down,” Susan Williams said. “So you just need to know where I’m coming from right off the bat.”

Cunningham told IBJ that whatever form the restaurant takes, he intends to follow through on his plans.

“We’ll work with their recommendations, and our plan is to get back in front of them in the next 30 to 60 days and figure out a way to save what we can save,” he said.

The changing menu would range from 12 to 15 entrees priced from $8 to $30. A three- or five-course dining option with wine also will be available, Cunningham said.

Menu changes at his establishments typically are done without much orderliness, prompting the idea for a test kitchen.

“We just got to the point where we felt we needed to put human resources toward developing new ideas,” Cunningham said.