• A sign on the door at 1 N. Meridian St. in the King Cole building, last occupied by the short-lived Bacon, Legs & Turntables, says a crustacean concept called The Boiling is coming soon.

At 15 N. Pennsylvania St., Jack’s Pizza is opening where its pie-centric predecessor, Agostino’s Pizza, closed in January 2015 after an eight-month stint.

Locally based Jack’s, founded in 1966, has 11 locations in the Indianapolis area.

• The facade of the former Legal Beagle bar at 20 N. Delaware St. is barely recognizable now that Rebar Indy is close to opening there. 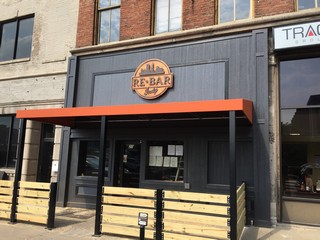 Owners had expected to begin serving customers with a soft opening Aug. 1 before ramping up to full operations Aug. 8. However, a July 25 Facebook posts says “we are opening soon,” but it doesn’t provide a date.

• The Owner’s Wife at 608 Park Ave.—just off Massachusetts Avenue—should be open by the end of the month, a spokesman for the brewpub said. Brugge Brasserie owners Ted Miller and his wife, Shannon Stone, are behind The Owner’s Wife, a tongue-in-cheek reference to Stone.

The Owner’s Wife is an extension of adjacent Outliers Brewing Co., also operated by Miller and Stone. Jonathan Brooks, owner and head chef of Milktooth on Virginia Avenue in the Fletcher Place neighborhood, is the consulting chef.

• Gandolfo’s New York Deli at 309 S. Delaware St. in CityWay has closed after two years in the downtown location. The Utah-based chain was hoping to have a dozen Indianapolis-area restaurants by mid-2017, but now only has two after closing the downtown shop and one in Noblesville. Remaining local locations are in Carmel and Zionsville. Another is planned for Avon.

• Metro Diner is expanding quickly in the local market. The Jacksonville, Fla.-based breakfast chain opened its first Indianapolis outpost in May, at 3954 E. 82nd St. in Clearwater Crossing, and is set to follow up this month with another, at 7225 U.S. 31 on the south side.

Next, Metro Diner will be joining Scotty’s Dawghouse in the new parking garage at Butler University. A construction permit says the eatery will take roughly 3,800 square feet there.

• Allen Edmonds, a manufacturer of upscale men’s shoes, is opening at The Fashion Mall. The Port Washington, Wisconsin-based company is one of the few remaining U.S. shoemakers.

• Village Cigar at 6513 N. College Ave. in Broad Ripple has closed. A voicemail message says the cigar bar is planning to reopen at another location.