The partners are investing about $100,000 in the 2,000-square-foot leased space that will feature new and used albums, a stage with a furnished high-end sound system, and a small bar serving beer, wine and coffee.

The shops quickly amassed a loyal following by using organic ingredients in their doughnuts and providing vegan options. But Burtch announced in an Oct. 17 Facebook post that he closed the stores to focus on his new venture.

“Originally, I thought Rocket 88 would keep going,” Burtch told Property Lines. “But it became apparent that I couldn’t do both. Music is more my interest and passion.” 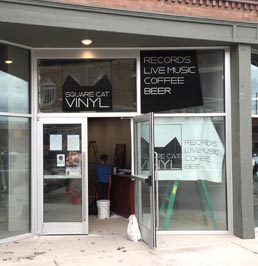 Rocket 88 could resurface. Burtch said he’s received interest from others who might want to take over the business.

In the meantime, Burtch has partnered with Mike Angel and Kurt Phillips to start Square Cat Vinyl. Angel is the singer and guitarist of local folk band Bigfoot Yancey, and Phillips owns the Fountain Square Animal Clinic and Mass Ave Animal Clinic.

Burtch and Angel organized the first Virginia Avenue Folk Fest in May and hatched the idea for a record store from the partnership, Burtch said.