City officials are exploring an unusual method to help finance an $18 million mixed-use project in Fountain Square without subjecting the city to any risk.

Carmel-based Jackson Development LLC announced in June that it would redevelop nearly an entire city block by tearing down five old buildings and constructing a new five-story building with 94 apartments and 8,500 square feet of commercial space. 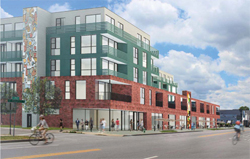 The project, which has yet to be named, would sit on 1.02 acres at the southwest corner of Prospect and Spruce streets, a few blocks east of the neighborhood’s commercial core, where Prospect intersects with Virginia Avenue and Shelby Street.

Jackson Development has the land under contract and hopes to start construction in June, if financing falls into place on time, Carter Jackson told Metropolitan Development Commission members on Wednesday.

The area sits outside a tax-increment financing district, making it difficult for the developer to receive city assistance for the project.

But city officials, through MDC approval, want to establish a new TIF district just to cover the project area.

Here’s how the financing would work: The city would pledge a yet-to-be-determined amount based on the tax increment expected to be generated by the project. If for some reason the increment doesn’t cover the amount the city provides, the developer, through a developer-backed bond, is responsible for the difference.

“We’re releasing some increment, but if it isn’t enough, the developer is on the hook,” said Jeff Bennett, deputy mayor of community development. “In no way is the city on the hook.”

The development is expected to increase the property’s assessed value by $11.9 million. The MDC is set to consider approving the financing plan next month.

Without some sort of city assistance, the project might not get developed. Or Jackson Development might have cut corners on design costs, Bennett said.

In exchange for the city assistance, Jackson Development has agreed to reserve 10 percent of the units as affordable housing options.

The city is willing to provide the assistance because the project could dramatically overhaul part of the neighborhood and extend Fountain Square’s core to the east. It also would like to explore using the option in other areas of the city, Bennett said.

“This will create an east anchor to Fountain Square and will help jumpstart the east end of Prospect Street,” said Steven Hardin, a lawyer at Faegre Baker Daniels representing Jackson Development.