When developers announced plans in April to build a $15 million mixed-use development next to downtown's historic Athenaeum building, they had hoped to begin construction in the fall. 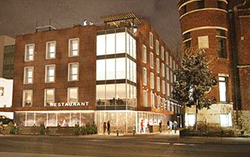 That hasn’t happened, despite approval from the Indianapolis Historic Preservation Commission.

In fact, IHPC and Dan Jacobs of Indianapolis-based Chase Development Inc., which is partnering on the Block 20 project with the Athenaeum Foundation, are named in a court action filed by neighbors of the building.

They want a judge to review the IHPC’s decision and disapprove the certificate of appropriateness that the commission granted for the project (see accompanying rendering). IHPC voted 5-1 in favor of Block 20, with commissioner Susan Williams casting the lone dissent.

If the request for judicial review sounds familiar, it’s because Block 20 is not the only high-profile local apartment project now facing a backlash from neighbors.

Milhaus Development LLC sought the variances as part of its plans to build the mixed-use development on the former AT&T property south of Kessler Boulevard. The project would feature 100 apartment units and 9,200 square feet of street-level retail space.

Meanwhile, Jacobs of Chase Development said in an e-mail that he’s unsure when construction will start on Block 20.

“I am greatly disappointed in the appeal given that, based on frivolous merits, a select few are trying to undo a grass roots effort by many,” he said. “This is a project that will provide great benefit to the Athenaeum Foundation, Lockerbie, and the city of Indianapolis. I look forward to seeing it to fruition.”

Block 20, proposed for a lot immediately east of the Athenaeum and fronting Michigan Street, would include as many as 70 apartments, roughly 10,000 square feet of retail space, and a 229-space parking garage. The Athenaeum Foundation, which owns the building, bought the lot in 2001. Because it’s a not-for-profit, the foundation does not pay property taxes on it.

The neighbors argue that the project violates a restrictive covenant on the property because it calls for only “residential” construction there and that the commission was obligated to enforce the covenant.

Under the Lockerbie Square Historic Preservation Plan, residential development should be consistent with the composition and character of the neighborhood, which consists mostly of single-family homes, they say.

They also contend the plan requires one parking space per unit and that the five-story project would obscure all eastern side views of the Athenaeum, which is listed on the National Register of Historic Landmarks.

Neighbors cite several other arguments against the project, including increased traffic and inappropriate setbacks along East Street.