The Indianapolis Historic Preservation Commission meeting on Wednesday featured two high-profile redevelopment projects near the city's center that have been in front of members before. Here’s the latest on their progress. 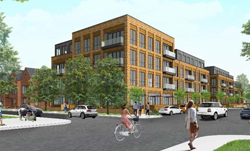 It’s back to the drawing board again for Charlotte, North Carolina-based developer Paul Vezolles, who has proposed mix of condominiums, town houses and single-family homes over the full block.

IHPC members voted to push a vote on the project to May 3.

Leaders of the Chatham Arch Neighborhood Association still think the project is too dense for the neighborhood, despite recent concessions from Vezolles. They include removing a fifth story on the 56-unit condo building at the corner of East and Ninth streets (see the new four-story version above), and agreeing to develop the project in one phase instead of two, as he originally intended.

But commissioners still prefer a three-story building, or at least “stepping back” the fourth story at the corner and “stepping it down” as the building progresses east into the Chatham Arch neighborhood.

Vezolles agreed to the continuance, although he appeared to be losing patience with the process. He first presented his plans at a preliminary review in November.

“We’re approaching the limits of what we can do. We can’t build a three-story building,” he told IHPC members. “We have investment requirements that demand certain things to happen.”

Vezolles previously has agreed to setting back the condo building 12 feet from the street; replacing the two three-story townhouses on Park Avenue and Ninth Street with a single-family home and three duplexes; and reducing the size of the retail space to 2,400 square feet.

Neighborhood leaders remain steadfast, however, in their opposition. 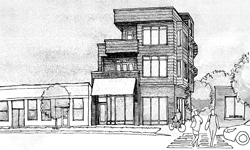 Edward Battista received approval to begin demolishing the building at 638 Virginia Ave., south of Repeal restaurant, to make way for a new four-story building with retail on the ground floor and condo units on the upper floors (see image at right; the fourth level is recessed to the back). And he agreed to use some of the original facade material to recreate a storefront reminiscent of what it would have looked like in the 1920s.

Battista wants to tear down the current one-story, dilapidated structure on the site in the Fletcher Place neighborhood that originally was built as a residence in the 1870s and converted to commercial use in the 1920s. But commission members said in February they couldn’t recommend demolishing the structure without knowing what would replace it.

“We do understand that the building does have a place in the neighborhood,” architect Lucas Brown told commissioners. “We’re going to try to repurpose the bricks as much as we can.”

Commissioners preferred Battista’s new design plan to the previous one.

“This a great transition and much more becoming of the neighborhood,” commissioner Annie Lear said.

Commissioners are scheduled to approve related zoning and variance requests at an April 19 meeting. Battista said he hopes to begin construction yet this spring.