A contentious condominium development that would encompass an entire block in the Chatham Arch neighborhood has finally won approval from the city. 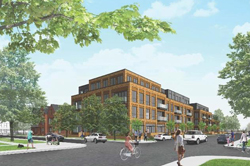 The Indianapolis Historic Preservation Commission voted 6-1 Wednesday in favor of the project, which features 55 condominiums in two four-story buildings along North East Street south of Ninth Street, along with seven single-family homes and four townhouses situated on the east side of the block facing North Park Avenue.

IHPC member Sally Cook voted against the development. Joann Green recused herself from the vote, and Susan Williams was absent.

To make way for the development, Paul Vezolles of Charlotte, North Carolina, will demolish the one building remaining on the property—a one-story structure at 855 N. East St.

Vezolles won IHPC approval by agreeing to make more changes to his proposal, which initially faced severe opposition from some neighborhood residents who argued that the project was too large for the largely residential area filled with restored homes. 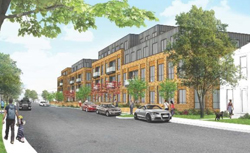 “As far as the quality of the construction and the design, this is probably one of the best quality-designed projects we’ve seen in the last five years,” IHPC member W. Bruce Stauffer said.

Chatham Arch resident Clay Miller, however, argued to no avail that the project still was too tall.

Vezolles revised his plans several times to win approval. He first presented them to IHPC for preliminary review in November. In December, IHPC members weren’t satisfied that all the changes and additions to the site plan they requested had been made, prompting them to call for a continuance. The project subsequently appeared before the commission in February and April, with commissioners asking for more changes.