The parapet being installed atop 360 Market Square is generating a lot of debate among design aficionados who question whether what's there now looks like what’s depicted in the architectural rendering (see top image) of the soon-to-be-completed downtown apartment tower. 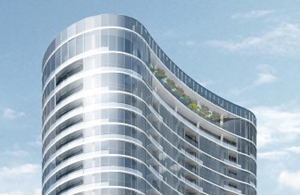 The discussion is particularly heavy on the forum devoted to the building at skyscrapercity.com. There's confusion about the construction materials used on the top of the building and their color. The east and west ends of the oblong parapet appear to have a matte finish (see middle image) that doesn't resemble the sleek and shiny look of the rendering. One poster postulated that the material is a protective coating.

Another poster wrote: “I have to believe that is just a protective covering. … If I'm wrong, I'm going to be cursing the developer’s name till I die!” 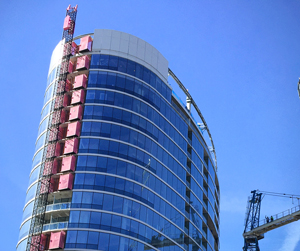 Locally based Flaherty & Collins Properties is the developer of the $120 million, 27-story mixed-use apartment project that’s set to be finished near the first of the year. A 40,000-square-foot Whole Foods will anchor the 300-unit building and should open on the first floor in March.

About the parapet, Flaherty & Collins says what has been installed is, in fact, permanent.

"The panels on the east and west are finished product and not a covering," company spokesman Brian Moore said in an email. "It does not match the renderings on the website. Those were the conceptual renderings from 2015, and the building design for that portion has been updated since then."

The material in the renderings is spandrel glass. The material that has been installed is aluminum.

"Its main function is to screen the rooftop mechanical equipment, which dictated the use of an opaque material," Moore told IBJ.

Demetrios Stavrianos, senior vice president for project architect CallisonRTK, explained further: “We believe the current design is consistent with the design intent of the original concepts. At that time, the crown material was a spandrel glass, but after careful consideration, we decided to change this material to an aluminum panel. We feel it's more thematically successful at tying the entire composition together because it's the same aluminum panel we are using at the building's slab edge covers.

"Additionally, we believe that, since the aluminum panel will be more visually pronounced than the spandrel glass at night, it will help to better define the building on the Indianapolis skyline."

Moore said that Flaherty & Collins is working to get new renderings. But until they're complete, the outdated versions are the only ones available.

Meanwhile, Moore provided more insight into what the north and south sides (see bottom image) of the building's top will look like, once finished.

“What you don’t yet see are metal panels that get hung on the beams creating the sky windows on the north and south ends,” he told Property Lines. “The removal of the crane (occurring now) and the removal of the hoist happening next month will allow the crown to get completed by late November.”

Another contributor to skyscrapercity.com remarked that the parapet “doesn’t look awful, but I am going back to my previous comparison now that this building looks like a giant stick of deodorant.”

For its part, Flaherty & Collins is pleased the project is generating discussion.

“We’re glad that it’s catching eyes and attention, and that folks are talking about it,” Moore said. “We hear from people all the time that love the building and the overall look, and we’re excited to finish up over these next few months.”