HANGZHOU, China—All the talk during our visit in China about gross domestic product makes it easy to forget this is still a Communist country.

Earlier this week, our group met for nearly an hour with Jin Deshui, Chinese Communist Party secretary for Zhejiang University and vice chairman of the Standing Committee of the Zhejiant Provincial People’s Congress. While it was a highly ceremonial affair with no revelations, it was still an unforg 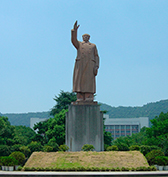 We sat around the edge of a circular room and heard Jin pontificate on—what else?—the economy. He recited the strengths of the Zhejiang Province business community and the merits of the government’s new five-year economic plan. He was hopeful it would boost GDP in the province from $7,500—already the best in China—to $10,000.

And of course Jin recited China’s impressive record of growth, which has boosted the GDP more than 90-fold over the last three decades and elevated the country to the world’s second-largest economy.

It’s no coincidence that party leaders seem as obsessed with economic growth as any hard-bitten entrepreneur from the West.

“Legitimacy comes about through economic performance, defending the country’s national honor, a sense of fairness and things like that,” said Scott Kennedy, the director of Indiana University’s Research Center for Chinese Business & Politics and the leader of our group.

But there are nagging reminders that China, though it has adopted a capitalist mindset, hasn’t embraced all the freedoms we take for granted in the United States. Some websites here are blocked—forget about using Facebook, for instance—and the media are under the control of the party.

To be sure, China is a country rife with contradictions. Its economic growth is the envy of the rest of the world. Yet it wasn’t that many decades ago that Mao Zedong, founder of the Peoples Republic of China, was spouting anti-capitalist and pro-class-struggle rhetoric completely at odds with the country’s current strategy.

The Chinese have a complex view of Mao, who was chairman of the Chinese Communist Party from 1943 until his death in 1976. The Communist revolutionary is heralded for founding the PRC in 1949 after a drawn out civil war. But he also shoulders responsibility for the Great Leap Forward and the Cultural Revolution—political campaigns gone awry that caused millions of deaths and severe famine from the late 1950s through the late ’60s.

But the Chinese haven’t repudiated Mao—a point driven home by the giant Mao statue on the campus of Zhejiang University here.

Kennedy, an associate professor in the departments of Political Science and East Asian Languages & Cultures, said the Chinese assessment of Mao is 70-percent positive and 30-percent negative.

“That’s partly because the dirty laundry isn’t fully aired,” he said. “Textbooks and TV programs tend to be very brief on post-’49 problems.”

Another issue, he said, is that the economic reforms the government launched in 1978 have led to widening inequality in China’s society. Some Chinese recall Mao’s rein as “a simpler era of greater equality and fairness,” Kennedy said, though in fact inequality also was prevalent under Mao.