“It’s a job killer,” Tom Allen, the CEO of Warsaw-based Iconacy Orthopedic Implants LLC, told Fox Business News. Mark Throdahl, CEO of Warsaw-based OrthoPediatrics Corp., said last year his firm would have hired four additional product development engineers if not for the $300,000 it was paying each year because of Obamacare's medical device tax.

And this year, hsopital equipment maker Hill-Rom, which has significant oeprations in batesville, cited the medical device tax as one of three factors causing it to lay off 200 workers.

These claims aren't without reason. The 2.3 percent tax on revenue (not on profits) would reduce the standard 10-12 percent profit margins in medical devices by about 30 percent, according to the industry group AdvaMed.

If that’s really playing out in the marketplace, it’s a big deal for Indiana. Companies making medical devices and supplies employed more than 16,000 Hoosiers in 2013, paying out wages of more than $1 billion, according to the Annual Survey of Manufacturers. A 2010 report commissioned by BioCrossroads estimated the economic output of Indiana's medical device comapneis at mroe than $10 billion a year.

Companies such as Cook Medical in Bloomington, Roche Diagnostics in Indianapolis, and Zimmer Biomet in Warsaw employ huge work forces in the state.

The problem for those pushing efforts to kill the device tax in Congress, however, is that there isn’t a lot of evidence that the device tax has been “killing” jobs.

Oh, AdvaMed has tallied up every layoff since Obamacare became law and hung the totals around the neck of Obamacare’s medical device tax. But that’s hardly legitimate analysis, particularly when the lingering effects of the Great Recession have pinched the industry.

I pulled data from the Census Bureau’s Annual Survey of Manufacturers, for which 2013 data is now available. That’s fortuitous because the medical device went into effect in On Jan. 1, 2013. And industry experts say medical device makers started reacting to it before then.

You can see that in the chart below: 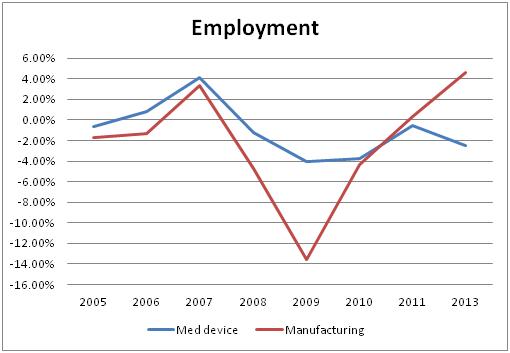 The same trend holds for capital expenses, which you can see here: 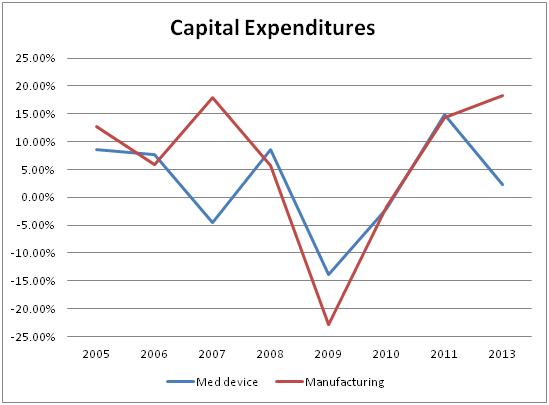 If medical device makers had expanded their employee counts as fast as all manufacturers did from 2011 to 2013, they would have hired about 20,000 additional people. That would have been a 7 percent increase over what actually happened.

And if they had expanded their capital expenditures as fast as other manufacturers during those years, they would have spent an additional $63 million—about a 2 percent increase over what they actually spent.

The thing is, medical device firms from 2011 to 2013 lost essentially no ground to other manufacturers on the growth in the value they added to the raw materials they use or the growth in wages they pay to each of their production workers.

That suggests that while the device makers hired fewer people and invested less money, they still found ways to be as productive as ever—partly by payer their fewer workers higher wages.

Unfortunately these kinds of data are available for Indiana only for the year 2013. So we can’t see this kind of historical performance.

So to test the impact of the device tax in Indiana, I looked at the Census Bureau’s County Business Patterns’ data for Kosciusko County, the home of Warsaw, the "Orthpedics Capital of the World."

You can see the trend in the chart below: 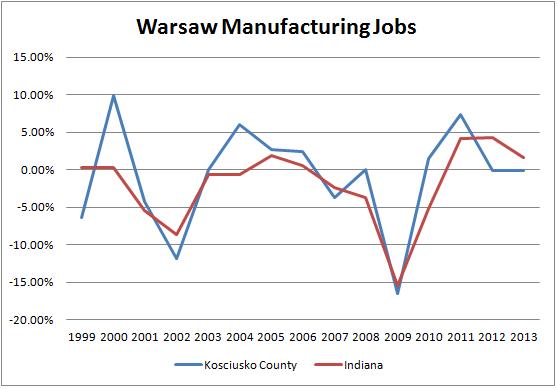 If manufacturing employment in Kosciusko County had grown the past two years at the same clip as the rest of manufacturers in Indiana, the county would have seen 809 additional jobs—a 6 percent increase over where it ended up in 2013.

But those modest differences—20,000 jobs nationally and 800 jobs in Indiana’s orthopedic capital—would be the absolute maximum anyone could blame on the medical device tax. And to do that, they would have to ignore other changes, such as how Obamacare and more cost-consciousness by employers and consumers have greatly limited the medical device industry’s ability to raise prices.

They also represent the impact of the tax before the expansion of insurance coverage that Obamacare started in 2014. Proponents of the medical device tax have argued that the industry would benefit from those additional paying customers.

Medical device companies have argued that they would see no benefit from that increase, since they sell most of their products to hospitals, which are required to treat patients regardless of insurance.

In any case, these figures from 2013 could well be the worst that it gets for the medical device industry. So unless we get more evidence, it’s hard to see that the sky is falling for medical device firms.