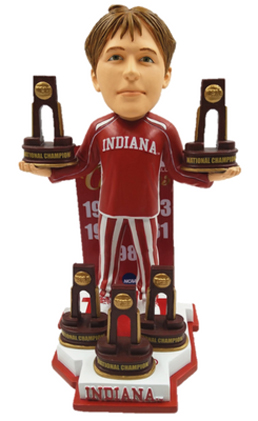 By 10:30 a.m. on that same day, the museum emailed me to let me know that the 216 numbered IU hoops bobbleheads (see accompanying image), which cost $40 each, had sold out in record time.

“We were blown away by how quickly Indiana fans snapped up the limited-edition bobbleheads commemorating the school’s championships—it was quicker than any other school that we’ve released,” Phil Sklar, co-founder and CEO of the National Bobblehead Hall of Fame and Museum told IBJ. “This is a testament to Indiana’s passionate fan base, and we will be producing enough of the second version to ensure every Indiana fan has an opportunity to purchase them.”

Yes, the National Bobblehead Hall of Fame and Museum is working on a second version that will have some slight modifications—including dressing the figurine clad in an Indiana home jersey.

While the IU bobblehead looks a bit like former IU player Ted Kitchel, who started on IU's 1981 national championship team, Sklar told IBJ it is not.

“The bobblehead is just a generic person, as licensing doesn’t allow for a current or former player to be used,” Sklar said.

Whoever he is, he’s wearing IU's trademark candy-striped pants (a nice touch) and in the original version a red Indiana sweatshirt. He is holding two national championship trophies and has three more at his feet.

Clearly the National Bobblehead Hall of Fame and Museum has tapped into an unmet demand. This is the first bobblehead commemorating Indiana’s national championships, which were in 1940, 1953, 1976, 1981 and 1987.

Indiana is the 23rd school represented in this series of bobbleheads.

Soon to come, according to the National Bobblehead Hall of Fame and Museum, are bobbleheads commemorating the national titles of UCLA and Duke basketball. So we’ll soon see how IU’s record holds up against two of the college hoops' other dynasties.