When a team struggles, the coach might call in reinforcements. For the WNBA's Indiana Fever, those reinforcements include lightsabers, free food and one big, inflatable slide.

Despite a franchise low 2-20 performance so far this season, the Fever continue to draw fans— enough to place them at No. 7 in the 12-team league in attendance, averaging 6,077 spectators a game after the first 12 home contests. 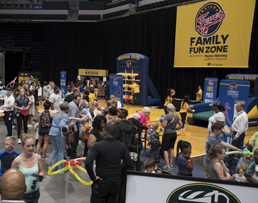 The team's attendance strategy starts with showing parents that children will be welcomed and entertained at games. (Images courtesy Indiana Fever)

The Fever's attendance consistently scored higher than the league's average from 2010 to 2015. Last season — the first season without star forward Tamika Catchings on the court —attendance dropped below average for the first time. This season's attendance to date is the lowest in the 18-year history of the franchise. The second-lowest was in 2006 with 7,204 average attendees for the season.

Team officials said the attendance decline is mild considering the team's record, and they credit a relatively new focus on young fans and digital media for salvaging ticket sales.

"We shifted our strategy to focus on getting more families to games," said Julie Graue, the Fever's chief operating officer the last two seasons. She has worked for the team primarily in sales since 2001. "We want to redefine the Fever … as a place for fun summer entertainment."

The strategy starts with showing parents that children will be welcomed and entertained at games, Graue said. And so far, the Fever executive has achieved her goal — more than 10,000 people attended the July 11 "Kids Day" game against the Minnesota Lynx, making it the best-attended home game this season.

Key initiatives include free meals—a hot dog, chips and soft drink—for the first 1,000 children on Fridays and Saturday nights, expanded free admission to select seats for those under five, and a "Star Wars" theme night — with Lucasfilm-approved sound bites and characters.

Also new to the younger crowd this season is the newly minted Family Fun Zone, bearing the name of one notable sponsor — Peyton Manning Children's Hospital at St. Vincent.

The 6,000-square-foot Family Fun Zone, which replaced some lower-level seating on the north end of the stadium, is available to all ticket-holders from the time doors open until tipoff and again at halftime. A large slide and other inflatables mark the area, alongside a miniature basketball court, face-painters and caricaturists.

Graue added that the Fever ranks No. 3 in the league for social engagement, a measure that compiles several metrics from online assets and social media. The team has 39,100 followers and has received 6 million-plus impressions on Twitter this season. The Fever Facebook page has drawn 68,904 “likes.”

Social-media engagement is powered by a three-person digital marketing team. Each staffer specializes in a specific area—social content, the Indiana Fever website, or e-commerce strategies for direct ticket sales.

"That's something we didn't have three years ago," Graue added. "It's a positive step for everyone … that includes numerous opportunities."

The strategy is especially appealing for the team's 45 sponsors, who can advertise on the Fever website, social media and direct e-newsletters combined. A strong social media presence also helps draw fans who follow a particular player, Graue said.

She pointed to rookie Fever guard Victoria Vivians, an alumna of Mississippi State University, as a prime example. People who followed Vivians at the college level transferred with her to Indianapolis, racking up more views, follows and, sometimes, ticket purchases, Graue said.

The Fever face the Minnesota Lynx at 1 p.m. Wednesday at the Target Center in Minneapolis.