Home » First decade of century marked by buyouts and bubbles 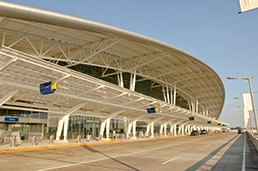 The midfield terminal at Indianapolis International Airport was the biggest of a slew of new building projects to rise
on the local skyline. (IBJ File Photo)

Acquisitions and sales reshaped the corporate landscape. Anthem became WellPoint
Inc. as it rolled up one health plan after another until it covered more people than any other health insurer in the country.
Mall owner Simon Property Group Inc., which built a new headquarters downtown, failed in a hostile bid for one rival but snagged
three outlet operators and is grappling for more.

Insurer Conseco Inc. succumbed to its debt and limped out of
bankruptcy, then chased down Steve Hilbert and other former brass for unpaid loans. Medical-device maker Guidant Corp. called
off its purchase of Bloomington’s Cook Group only to become the prize in a bidding war ultimately won by Massachusetts-based
Boston Scientific Inc.

Guidant’s was one of several prominent corporate names to disappear, along with
Bindley Western, First Indiana, Union Federal and ATA. Marsh Supermarkets Inc. sold itself to a private equity firm but retained
its local presence and name—so far.

The buyout game took local financier Tim Durham to new heights, the
top of the Bank One—er, Chase—Tower, but then to deep lows. The FBI raided his offices to probe his use of investor
money to give loans to himself and his friends.

Eli Lilly and Co. continued to pooh-pooh the mega-merger chase,
even under new CEO John Lechleiter, but then spent $6.5 billion on ImClone Systems—its largest acquisition ever. The
company had its star drug Prozac taken away early by a surprising court decision, but survived by launching a raft of new
drugs. It needs a similar performance now as it faces patent expirations on five blockbusters in the next five years.

While Lilly has shed jobs to cut costs, a local life sciences initiative has attracted millions in out-of-state venture
capital to feed startup companies. Indiana and Purdue universities refashioned themselves as economic development engines
capable of turning science into business.

Former Lilly executive Mitch Daniels became governor—the first
Republican in 16 years. He brought with him a bevy of business honchos to run state government, pushing Indiana into daylight-saving
time and pulling in new investments from Toyota and Honda.

The domestic automakers fared far worse, however,
as soaring gas prices ended the boom in SUVs, and retiree health care costs sapped the competitiveness of General Motors Corp.
and Ford Co. Both decided to close major plants in Indianapolis.

The city’s professional sports teams traded
fortunes, with the Indianapolis Colts soaring to a Super Bowl win in 2007 while the Indiana Pacers fell from a runner-up finish
in the NBA Finals in 2000 to a perennially losing team known best for fighting with fans in Detroit.

Local leaders are struggling to maintain the sports
venues that were the foundation of Indianapolis’ downtown rebirth. The tennis, track and swim stadiums are stressing
IUPUI, just as Lucas Oil Stadium and Conseco Fieldhouse are straining city government. Mayor Greg Ballard—who ousted
Bart Peterson in a shocking upset fueled by voter ire over rising taxes—is still searching for a solution.

The new decade dawns on an economic downbeat: One in 10 Hoosiers is searching for work.•