Home » Clarian to resume construction at Riley Hospital for Children

Within a few weeks, Clarian Health will restart construction on a bed tower at Riley Hospital for Children and is set to
lift other cost-saving restrictions it adopted 11 months ago. It’s the latest exhalation by a local hospital after massive
investment losses and a scary economy forced them to tighten their belts a year ago.

Now, Clarian will resume
full pay for its executives (who all took a 10-percent cut in 2009), and once again offer tuition reimbursement
to its employees.

Clarian also plans to have the first phase of the Simon Family tower at Riley completed before
the end of the year. That part of the 10-story, $475 million inpatient facility was supposed to open
in June 2009. All phases are still scheduled to be in full use by 2013. 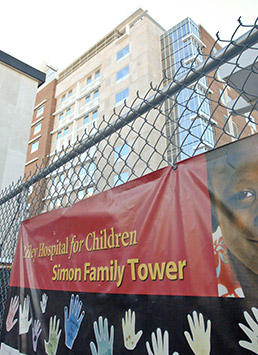 Halted in February, work
on an expansion of Riley Hospital will resume within weeks. (IBJ Photo/Robin Jerstad)

The Riley
project was one of two Clarian halted and has since restarted. It announced last year that it was resuming construction
on a $190 million, 44-bed hospital near Fishers.

In all of last year, Clarian saved a bit more than the $225 million
it projected in February that it would.

Clarian officials gave credit to the hospital system’s employees
for generating additional ideas for saving money. They suggested various ways to do less printing of
internal reports, more vigilance about turning out lights when not in use, and other items that added
up to make a significant impact.

Hospitals around the country went into cost-saving mode
in late 2008 and early 2009, after they watched the meltdown on Wall Street decimate their investments.

In Indianapolis, however, only one other hospital system put a building project on hold. St. Francis Hospital
& Health Centers “stopped and then restarted” work on a 221-bed tower at its campus on the southern edge of
Indianapolis.

By contrast, Community Health Network plowed ahead with a $130 million expansion of its Community
South Hospital, on County Line Road.