On a clear, late afternoon in January 2009, a FedEx Airbus A-300 lumbered down runway 5R at Indianapolis International
Airport on its takeoff run, its engines screaming.

At 135 miles per
hour and seconds from liftoff, the pilot saw a hawk standing in what might as well have been a suicide pose
on the center line of the runway.

“Heard a thud on left side
then smelled bird,” states the cryptic account in the Federal Aviation Administration’s wildlife
strike database.

The hawk did $53,234 in damage to the freighter, trashing
11 fan blades in the No. 1 engine. Nobody was hurt except for the plane—out of service for three
days.

Oh, as for the hawk, “found no evidence,” the report
said of its obvious fate.

Bird strikes remain a threat—statistically
more so than a Nigerian terrorist with a bomb in his BVDs—at Indianapolis International.

Through last July—the most recent data compiled by the FAA—there were 37 bird strikes reported at the airport
in 2009. Five of them, including the FedEx incident, involved damage or temporary grounding of an aircraft.

That contrasts with no damage reported in full-year 2007 and 2008, when strikes totaled 60 and
71, respectively. By some estimates, only 20 percent of bird strikes nationwide are reported, however.

Yet few passengers give any thought to bird strikes or the potential outcome—or
at least they didn’t until five days after the FedEx hawk strike. 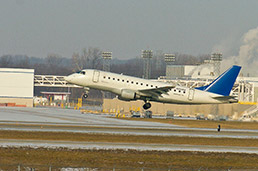 A United Airlines commuter jet takes off from Indianapolis International Airport. Bird strikes are especially worrisome
at this phase of a flight. (IBJ Photo/Robin Jerstad)

On Jan. 15 of last year, a US Airways jet
had just taken off from New York’s LaGuardia airport and climbed to 3,000 feet, when both engines
ingested a flock of geese and flamed out. Capt. Chesley “Sully” Sullenberger ditched in the
Hudson River and, against all odds, all 155 people aboard survived.

The so-called miracle on the Hudson has caused airports to be ever more vigilant about wildlife threats.

Mitigating odds of a collision between feather-covered and aluminum-skinned birds requires an active wildlife management
program.

Last month, the Indianapolis Airport Authority board renewed
a contract, for $106,200, with the U.S. Department of Agriculture Wildlife Service, which has been conducting
wildlife control activities at Indianapolis since 2000.

The partnership
has given the airport access to a USDA biologist, who tracks bird migratory patterns and analyzes strike reports.
The biologist also helps airport staff come up with new ways to harass the feathered critters.

This year, airport personnel also plan to unleash more “bird bangers,” which are devices
that project sound high into the air to scare away geese. Officials also are stepping up surveillance
of migratory birds, said Michael Medvescek, director of airport operations.

“That seems to be our biggest issue,” he said.

The move into the midfield terminal in late 2008 created a need for new bird-fighting techniques. The terminal’s swooping
roof is interesting to look at, but airport staff soon observed birds roosting on the structural supports of overhangs. Netting
recently was added to keep the birds out.

More care has also been taken
to eliminate food sources. That’s brought new lids for outdoor trash cans. Many of the brightly
colored flowers that were a familiar site at the old terminal are conspicuously absent at the new one. In their place
are native grasses that don’t produce seeds birds like to munch.

“People comment, ‘You don’t have the flowers, the things that you had at the old terminal,’”
Medvescek said, explaining why not.

The largest number of strikes occurs during spring and fall migrations.
In those seasons, strikes above 500 feet are roughly seven times more common at night than during the
day, according to IAA.

And the impact can be immense. An aircraft collision
with a 12-pound goose has a force equal to an elephant stampeding over a parked car, according to the
National Wildlife Research Center in Sandusky, Ohio.

For smaller planes,
such as small props used by many a business traveler, the risk can be even greater.

Gene Rhodes, a professor of forestry and natural resources at Purdue University, studied wildlife risks at 10 small Indiana
airports, for a report published last year in the journal Human-Wildlife Conflicts.

Nearly all the pilots he interviewed said at one time or another they had to “pull up”
on landing to avoid a critter on the runway. Even a rabbit could flip a small plane, he said.

One problem for airports, though, is that they may acquire vast areas of land no longer suitable
for residential or commercial development because of aircraft noise. Often, an airport will rent the
land to farmers.

“Agricultural lands surrounding airports can
attract large groups of geese or large flocks of birds feeding on waste grains or insects,” Rhodes
said. “Even lands [that] support large densities of small mammals can attract large birds of prey,
such as red-tailed hawks, and can serve to increase the probability of catastrophic bird strikes.”

Rhodes said infield management is key, such as minimizing standing water or wetland habitats near
runways.

The most common bird listed in strikes at Indianapolis is “unknown,” as there usually
isn’t anything left to catalog.

“Did
not find remains,” stated a bird strike report by Frontier Airlines last July at Indianapolis.

Sometimes there’s no effect on the flight itself, such as when a Southwest Airlines Boeing
737 last July ingested a small bird just after liftoff.

Back in 2005, an Embraer 145 regional jet
owned by Indianapolis-based Chautauqua Airlines took quite a wallop on approach to the airport. At about
500 feet, a large bird dented the covering on an engine, leaving a 12-inch by 4-inch dent that was 3
inches deep—and a $25,000 repair bill.

In 2003, passengers on
a Northwest Airlines flight got a scare when—just before the plane left the ground—the No.
2 engine stalled after striking a bird. The aborted takeoff smoked the brakes and blew out the DC-9’s tires.

“Right
windshield partially [one-half] missing. Noticed blood and Plexiglas covering cockpit,” the pilot said
in his report to the FAA.