Mayor Greg Ballard plans to renegotiate the city’s trash-collection-and-processing deals, a move aimed at boosting
Indianapolis’ woeful 3.5-percent curbside-recycling rate and making the city one of the best environmental stewards
in the Midwest.

According to the city-county budget, Indianapolis spent $27 million in 2009 on solid waste collection, plus another $12 million
on its disposal. City officials say collecting less refuse would cut those expenses. For every ton of garbage it incinerates
or dumps into a landfill, Indianapolis pays a $27 “tipping fee.”

“Why is recycling good for the city?” asked Kären Haley, director of the city’s Office of Sustainability.
“Ultimately, there are cost savings.

“The goal is to do it at the cheapest amount possible,” she continued. “If we’re able to find a way
to do this at no additional cost, that’s our ultimate goal.”

In early February, Ballard, a Republican, issued a formal request for ideas
on how to expand recycling here. Businesses’ responses were due Feb. 17, and Ballard staffers are reviewing them before
making them public.

“We really wanted to see what options are out there,” Haley said. “The landscape has changed a lot in the
last few years with regard to companies in town that do process recyclable materials, that do haul and collect.”

Marion County is broken into 11 waste districts. The city’s Department of Public Works is responsible for curbside
trash pickup in three of them. Republic handles pickup in seven more. Waste Management picks up trash in the last district.

For recycling, Indianapolis provides two systems: It offers 28 large bins where anyone can drop off cans and newspapers for
free. By contract, the city also allows Republic to charge residents who opt for curbside recycling in its districts and DPW’s
districts $6 per month. Clayton-based Ray’s Trash Service Inc. hauls away curbside recycling in Waste Management’s
trash district.

Last year, 12,874 Marion County households participated in the curbside recycling program. Pickups from curbs and free bins
generated 7,279 tons of materials. Ballard’s goal is to ratchet up both those figures and cut back what ends up in the
South Side Landfill and the Covanta Incinerator.

Indianapolis has a long way to go to be in the same league as some of the nation’s most recycling-friendly cities.
In San Francisco, Seattle and Austin, Texas, recycling rates hover around 70 percent, and officials are trying to push them
toward 100 percent. 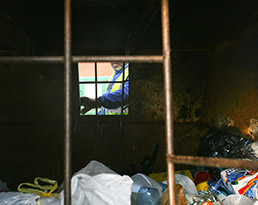 The average for major U.S. cities is around 50 percent, said Ed Skernolis, vice president of recycling for Stanford, Conn.-based
Keep America. Indianapolis is at the back of the pack, along with Atlanta and Houston.

The good news, Skernolis said, is that recycling has become a widespread political priority, which makes it far more likely
to succeed.

“Indianapolis is not alone with low recycling rates,” he said. “In each case where there is a major city
that doesn’t have very high recycling rates, we’re seeing action to change that.”

In Indiana, the city with the highest recycling rate is Valparaiso, 150 miles to the north. Nearly 63 percent of
homes set out recycling bins next to their garbage containers each week, and Valparaiso Mayor Jon Costas wants to bump participation
to 75 percent by 2012.

For a half-decade, Valparaiso residents have paid $9 per month for garbage and recycling pickup. The city uses proceeds for
road repairs. The result: Valparaiso now recycles more than half its waste.

“Every mayor and administration needs to make sure it’s competitive with the private market. But privatization
isn’t always the best answer,” Costas said.

For any program, providing convenience to residents is key, Costas and Skernolis agreed. Indianapolis took a major step in
that direction in late 2008, when Republic switched its curbside recycling containers from small, 18-gallon, open containers
to 96-gallon, covered bins.

Skernolis suggests going even further by expanding the types of materials Indianapolis accepts. Currently, the city’s
curbside system can handle Nos. 1 and 2 plastics, tin, aluminum, glass, paperboard and newspapers. It has no capacity for
huge categories of trash, such as food, outdated electronics and construction garbage.

The city also could dangle incentives for participation. For example, the Web site www.recyclebank.com allows people who
recycle to earn coupons they can redeem for discounts at various retailers. The city also could encourage participation by
making it more expensive for people to throw trash away and cheaper to recycle, via pricing and the size of bins allowed for
each type of disposal.

“There are opportunities,” Skernolis said. “It’s just a question of putting imagination into it.”

Skernolis said it might be possible for Ballard to meet his goal of increased recycling without increased spending. But the
low cost of trash disposal here will make it more difficult than in some areas of the country, where landfill tipping fees
can range from $50 to $100 per ton. Valparaiso’s tipping fees are about $37 per ton.

That’s why Carey Hamilton, executive director of the Indiana Recycling Coalition, wants to see Ballard attempt
to add revenue to the equation, perhaps from federal sources like President Obama’s stimulus and energy-efficiency programs.

Hamilton said that extra money can’t come from raising the $6 monthly cost of curbside recycling. She said reducing
that cost is essential to widespread adoption.

“We, the Recycling Coalition, are excited the city is reaching out to the private sector for ideas. We’re hopeful
there will be follow-through to come up with a plan that makes more sense than what we have now.”

But Ballard is struggling with the economics of how far to take the concept. And Haley said the mayor isn’t sure recycling
is a priority for many local residents.

“The mayor is a big proponent of curbside recycling, but he wants to make sure it’s what the citizens want,”
she said.

“We need to start with something that’s achievable. We need to start with changing mind-sets here. It’s
important to keep in mind Indianapolis is a very large, very diverse city. While certain parts of town might say, ‘Yes,
it’s important to have curbside recycling right now,’ there are areas that say, ‘Nope, I’m just fine
with the way things are.’”

The businesses that provide garbage disposal and recycling services are eager to weigh in. Haley said the city received five
to 20 responses to its request for ideas, but wouldn’t be more specific.

Republic offered one of them. Its spokeswoman, Peg Malloy, wouldn’t disclose its contents. But she said her company
has seen success in other cities where residents received recycling incentives, such as coupons from RecycleBank.

“You might ask, ‘Why should people need to be rewarded for doing the right thing?’ It’s human nature,”
she said. “That’s why you give a kid an allowance, or a treat to a dog for not jumping up. It reinforces good
behavior.”•