Home » LOU’S VIEWS: Home on the range for the holidays 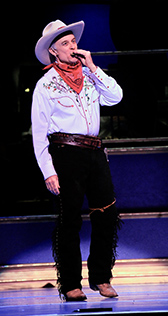 This week, five holiday shows—with and without cynicism.

The most heartfelt, inspiring moment in this year’s “Yuletide Celebration”—and perhaps the most beautiful moment I’ve experienced in the eight Indy holiday shows I caught this season—came at an unexpected time … during the encores.

True, there were earlier highlights. The Indianapolis Symphony Orchestra’s zesty “Here We Come a Caroling,” a perky “All I Want for Christmas is You” showcase for the singers and dancers, and a downright hilarious performance by guest magicians Les and Dazzle all helped make the seasonal show bright.

It was during the encore, though, long after the puppet reindeer had made their way down the aisle, the Santas had tapped away, and “O Holy Night” had been belted, that the true magic occurred.

That’s when Mike Runyan, who had earlier added just the right touch of folksiness to his solid musicianship with a sweet rendition of “Home for the Holidays,” paired beautifully with hostess Sandi Patty on “I’ll Be Home for Christmas.” It’s becoming a tradition at such holiday shows to acknowledge the men and women of the armed forces who can’t be with their families over the holiday season, but this ideal combination of performers, instruments and arrangement transcended what I’ve come to expect.

I hope Santa forgives me, but I’m compelled to add that an attempt to celebrate the 25 years of Yuletide with a video presentation felt more like the “In Memoriam” segment on the Oscars than a joyous look back. And while Patty was personable throughout, her delivery and arrangements sometimes crossed the line from spiritual to strident.

The holiday is, of course, a religious one, but a few numbers felt less like heartfelt professions of faith and more like presumptuous religious demands.

Straight-to-the-heart holiday moments also showed up in Actors Theatre of Indiana’s revival of “A Year with Frog and Toad,” offered at Pike Performing Arts Center Dec. 3-5.

No, this musical isn’t exactly a Yule show, but it does end near the December holidays and includes a touching “Merry Almost Christmas” number that gets to the core of the role people we love play in our search for holiday meaning. Once again, Bradley Reynolds and Don Farrell brought the title duo to life without an ounce of cynicism and with an abundance of humanity.

Holiday cynicism is one of the primary selling points of David Sedaris’ “The Santaland Diaries.”

The one-actor play grew out of Sedaris’ essay recounting his stint as a department store elf. For an hour or so, we’re told what it’s like to deal with crying kids, business-minded department store management, quirky Santas and missing-the-point parents by Sedaris/Crumpet the elf.

In a production by Bloomington’s Cardinal Stage that migrated up to the Indy Fringe Building for a run through Dec. 12, Scot Greenwell delivers the laughs and the edge throughout. He’s most winning, though, when delivering a Billie-Holiday inspired “Away in the Manger” and when recounting his encounter with a very special Santa.

Greenwell wisely keeps the revelations on a human scale—there’s not a sense that the experiences forever changed him, just that cracks have formed in his cynical façade. Unlike many one-person shows, “Santaland Diaries” left me wanting to hear more.

Cynicism is also the stock in trade of The Leisure Kings, lounge-suited musicians Michael Wiltrout and Sean Baker who, since 2002, have been creating untraditional versions of familiar songs much to the pleasure of open-minded crowds.

This year, the Cabaret at the Columbia Club took the chance of putting such an offbeat act in its first-class venue and the results were a full house and big fun.

Here was probably your only chance to experience an extended version of the schoolyard favorite “Jingle Bells/Batman Smells.” Or to hear “A Christmas Song” fused to the tune of Billy Joel’s “Just the Way You Are.” It’s where a reverent rendition of “Silent Night” is followed by a gargled version of same. And where Queen’s “Bohemian Rhapsody” proved the perfect musical setting for a medley of holiday hits.

On my visit, Wiltrout hadn’t quite adapted completely to the venue, with too much banter about how offended people might or might not be by the material (I didn’t see any walk-outs, even during “The Savior Man,” a joyful twist on “The Candy Man”). And sometimes the Kings took things a step too far, not in outrageousness but just in redundancy (there was nothing gained by the haunted house arrangement of “Silent Night”).

Still, this one-of-a kind-show—featuring a top-notch semi-big-band on stage—looks like an Indy holiday tradition in the making. It offered some of the smartest laughs and entertaining music of the season.

There wasn’t a hint of sarcasm in “Silver Bells Silver Screen” (through Dec. 17 at the Athenaeum), the latest production from Bobdirex.

The program notes claim the show was inspired by holiday television specials, but attendees are more likely to think of shows from the former American Cabaret Theatre that used to fill the stage of the Athenaeum with similar musical revues. Here, though, the projected slides are limited mostly to identifying posters from the movies that popularized many of the songs. And the pretension that marred many an ACT show is nowhere to be found.

The vocals are pleasant throughout, with highlights including a nice pairing of “Over the Rainbow” and “Home” (the less-familiar latter coming from the “Oz” redo “The Wiz”). And if the humor is hokey, the energy low-key and the theme fuzzy, that’s part of the charm. Approached with an open heart, “Silver Bells Silver Screen” is like a family gathering where the structure of the evening—and even the talent—is less important than the warmth.•