Home » Budget would take slice out of growing horse industry

A move by budget-makers to tap the kitty that feeds the state’s horse-racing industry could deal a blow to the business just as Indiana is starting to gain ground on its neighbors.

The state currently sets aside tens of millions of dollars from the Anderson and Shelbyville “racinos”—combined horse tracks and casinos—and funnels the money to the horse-racing industry. Most goes toward prize money to lure competitors to races.

But under the budget proposal in the Indiana House, lawmakers would redirect more than half that money to the general fund. In the fiscal year that ends in June 2012, the state’s thoroughbred, standardbred and quarter-horse industry would get $27 million—55 percent less than the $60 million it’s receiving this year.

Lawmakers say the money is an industry subsidy, one they can’t afford to maintain at such a high level as they struggle to craft a two-year, $28 billion budget without boosting taxes.

But breeders and industry advocates say slashing funding—and, as a result, purses—would be a death knell.

The additional money they’ve received since the racinos opened in 2008 has started to lure more breeders and competitors to Indiana, boosting its competitiveness with Illinois, Ohio and Kentucky.

The state’s horse-racing farms are concentrated in pockets near Madison and Shelby counties, where the tracks operate, as well as in the southeastern and northwestern corners of the state. 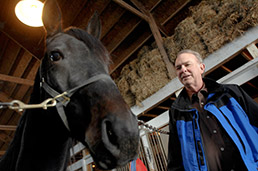 Jack Holton, seen here with his horse Hot Rod Peppa at his Westfield barn, is among the breeders concerned about the state’s proposal to cut horse-racing industry funding. (IBJ Photo/ Perry Reichanadter)

“The system the state put in place to enhance the industry is working, and we’re able to quantify that it’s working,” said Michael Brown, executive director of the Indiana Horsemen’s Benevolent & Protective Association, a group representing racehorse owners and trainers’ interests. “[The cuts are] a huge, dramatic blow to an industry at exactly the wrong time.”

When the state passed a law allowing riverboat casinos in 1993, lawmakers mandated that the horse-racing industry, as well as the tracks, get a share of the admissions charged to patrons of the boats.

In recent years, that 65 cents per person amounted to $17 million annually for the racing industry.

Then, in 2007, the Legislature approved slots gambling at the tracks, paving the way for racinos to open adjacent to Hoosier Park in Anderson and Indiana Downs in Shelbyville.

At the same time, lawmakers agreed to give the horse-racing industry 15 percent of what racinos brought in after paying winnings. That amount was capped at what was brought in the previous year, plus inflation, with the balance going back to the general fund.

At its height in 2009, the racino money provided $64 million to the horse-racing industry.

While the lion’s share has gone to purses, smaller amounts have funded industry promotion and provided care for older horses and assistance for workers who tend to them.

A portion of the purse money is earmarked for races open primarily to horses bred in Indiana—an extra incentive to draw breeders to the state.

The industry also gets prize money from other sources, such as entry fees and a portion of the betting money, but the majority comes from the racino payments.

Industry advocates say legislators put the funding in place to further a strategy of bolstering the state’s racing business.

But some at the Statehouse counter the payoff has spiraled out of control.

Rep. Jeff Espich, who leads the House’s Ways and Means Committee, said he and other lawmakers didn’t foresee the horse industry’s receiving such a large increase when they passed the racino bill.

“That’s a shameful subsidy to an industry that—while important—is no more important than all the others,” said Espich, R-Uniondale. “We don’t spend money subsidizing any other industry like that.”

Horse-racing advocates dispute the money is a subsidy. They say the reason lawmakers authorized racinos in the first place was to generate more money for track operations.

“Having slots is nothing more than adding a body shop to a car dealership,” said former car dealer Eddie Martin, a past president of the Indiana Thoroughbred Owners and Breeders Association who now consults with the group on legislative issues. “It’s just an additional profit center.”

Thirteen states have racinos, and most have a structure where some revenue supports the horse-racing industry, said Alex Waldrop, president of the National Thoroughbred Racing Association in Lexington, Ky.

Some states, including Pennsylvania, already have responded to tough budgetary times by tapping into the racino money earmarked for the racing industry.

‘Handing back the upper hand’

Indiana’s racino money has given it an advantage over states such as Kentucky and Ohio, where many tracks have struggled in the absence of racinos, Waldrop said.

The Purdue study, based on 2009 financial information reported by the state’s racetracks and 1,000 members of the racehorse breeding community, showed the economic impact of the industry to the state was a little more than $1 billion. That’s up from the $294 million calculated in a 2005 study by the American Horse Council.

Waldrop said scaling back the purses would be “handing back the upper hand in this business.”

“This money was having a real positive impact on your horse industry. People were coming to Indiana to breed horses and staying there at Kentucky’s expense and Ohio’s expense,” Waldrop said. “This is a move backwards.”

Breeders such as Jack Holton think so, too.

Holton typically breeds two or three standardbreds each year at WestWind Farms in Westfield. So far this year, he hasn’t bred any, and he doesn’t plan to if lawmakers approve the proposed cuts.

Less purse money would force the industry to cut purses, have fewer races, or both.

“That means less opportunity, therefore less money,” said Holton, who also serves as treasurer for the Indiana Standardbred Association. “The cost for [horses] will go down and the cost for breeding will go down. It’s a cycle they really don’t want to start.”

Cuts could spur the departure of breeders who moved to Indiana and invested in horse operations with the carrot of ample price money.

“The number-one factor that moves our industry is purses,” Martin said. “If you reduce them by half, it’s going to have a very, very negative effect.”

Espich acknowledges reducing the industry’s money would have an impact, but doesn’t think it would be as great as industry’s supporters project.

He pointed out that any business that’s subsidized will prosper. The question for him is why horse racing should get such treatment.

The budget bill is likely to be considered by the full House within a week.•